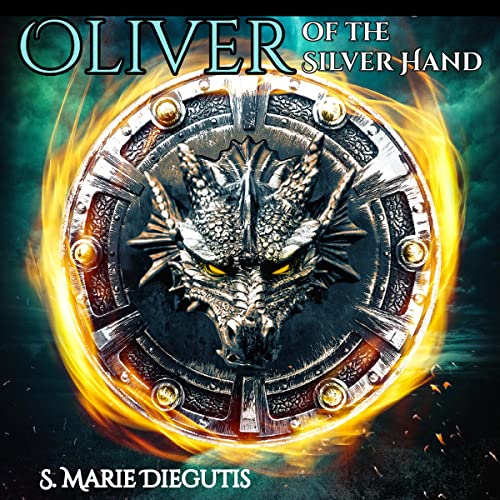 Oliver of the Silver Hand: A Fantasy Short Story

By: S. Marie Diegutis
Narrated by: Scott Fleming
Try for £0.00

Oliver Caradog saves a small boy from a white dragon. Unable to find his family and suspecting him to be not entirely human, he names him Jude and takes him home to be cared for by his wife in the realm of the tyrant King Vortigern.

Vortigern’s new castle is destroyed nightly by an unknown force. The king's mystical advisers instruct Vortigern to find and sacrifice a boy without a human father in order that his castle can be built to completion. And Oliver is tasked with a quest to find that boy.

Hiding Jude and deceiving the king, Oliver sets off not to find a child to sacrifice, but to seek allies to help remove the unstable, self-made king from his throne - and he finds an unlikely ally in the form of the white dragon, Eiradraig.

Vortigern hears of Oliver’s ward from his spying mystics. Rageful and betrayed, the king murders Oliver's wife Gwen in an attempt to take Jude for his sacrifice. Jude finds the aftermath and, in a fit of grief, sprints to the place where Gwen's brother was banished to find him and deliver the news.

He has unwittingly made an enemy of both the son of a black dragon and the most powerful wizard of all time: Gwen's Brother, Merlin.

The battle that follows at Dinas Emrys will curse one with immortality, send a dragon to an eternal grave, and see Gwen avenged. Soon after, it inspires the formation of the Welsh Society for the Protection of Dragons.

This is a fantasy fiction short story based on the real history of Wales, a beautiful and wild country where dragons have always lived.

A prequel to The Dragon Hatcher Book One: Wings on the Loose - a present-day urban fantasy.

What listeners say about Oliver of the Silver Hand: A Fantasy Short Story