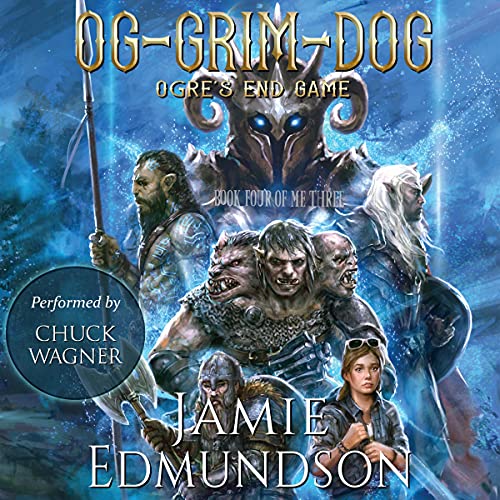 By: Jamie Edmundson
Narrated by: Chuck Wagner
Try for £0.00

"We have saved this world and travelled to worlds beyond it! We have deployed weapons of death beyond your imagination!"

Join everyone's favourite three-headed ogre in their world-hopping, climactic, final adventure. After The War of the Dead, things could not have ended more bleakly for Og-Grim-Dog and the broken land of Gal'azu. But they'll still save their friends, save the world, complete a satisfying character arc, and tie up all the loose ends from the rest of the series...won't they?

You know when a series comes along and just knocks tour socks off, well this Is just that, one of the most funny, witty and just a crazy a good fun read, as the story continues, Og-Grim-Dog get ready to tell their last story, at another venue, a larger audience, a special guest has arrived, Simba the dark Elf, just to make sure their not exaggerating on their part, with a new adventure they must recruit new associates to help with the final battle against the Succubus and Incubus, through the portals they travel to strange worlds and our own little planet Earth, which was one of the funniest scenes in the book, A fun mix of Avengers End Game tidbits put in with a cracking humorous portal fantasy is just genius, Me Three has its all, humour, the plot and worldbuilding is fantastic, lots and lots of insane characters that you will fall in love with, I highly recommend the audio, Chuck Wagnor gives an amazing preformence through out the whole series, what ye waiting for go check it out.....😁