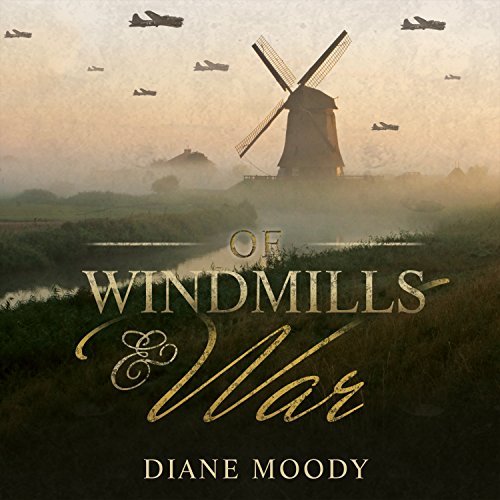 Of Windmills and War

By: Diane Moody
Narrated by: Justine Eyre
Try for £0.00

The rumblings of war in distant countries mattered little to Danny McClain. Growing up in Chicago, his world revolved around afterschool jobs, a rescued beagle, his pen pal in Holland, and the Cubs' chance to go to the World Series. Then, in December of 1941, news of the attack on Pearl Harbor hit much too close to home. In a few years, Danny found himself in the copilot seat of a B-17, stationed with the 390th Bomb Group in Framlingham, England.

Anya Versteeg had been just a teenager when Hitler's troops invaded her homeland of Holland in May of 1940. Forced to grow up much too fast, the feisty preacher's daughter eagerly immersed herself in the Dutch Resistance. Certain that God had turned his back on Holland, she did whatever she had to do to save her country before it was too late.

By 1945 the people of occupied Holland were starving. Thousands were dying every day. Then, just days before the war ended, help came to the Netherlands like manna from heaven.

Operation Chowhound held special meaning for Lieutenant Danny McClain. Somewhere below, in the battered land of tulips and windmills, was the girl who needed rescuing, and he would move heaven and earth to find her.

What listeners say about Of Windmills and War

I loved learning about the Holland Resistance during WWII

This book gives a unique perspective of an American G.I. and a Holland resistance fighter. I would recommend it to anyone that enjoys World War II historical fiction. I have read numerous books of this genre and I highly recommend this one. It doesn’t gloss over details of struggle, faith and endurance.

What made the experience of listening to Of Windmills and War the most enjoyable?

The story was so beautifully told and realistic to the era that I was left wondering, "How do people write like this?"

The author is very diverse in her writing. I have enjoyed every book she has written. This one was more in-depth and serious but her approach was realistic, yet sensitive.

I liked it a lot until the sap started to flow

The first half was interesting. The second half was like a made for tv movie on the Christian channel. So sappy.

Wasn't expecting all the religious overtones

Really entertaining, good book. There's a lot more religion than I had expected. I felt like I was beaten with it, but I looked past most of it. The plot was worth it.

The book got better as I listened more. At first I was annoyed by the narration but that seemed to improve as well.

This will always remain in my top ten books. The storyline & characters were superb. I have a long commute to work and bought the audio book - it was difficult to get out of the jeep once I reached the office and the same on the reverse trip. Only wish there was a book #2.

Excellent book. I felt the emotions of the characters and the story was very well done. I would recommend it to anyone that loves historical novels.

If Windmills and War

Very good book and well written. I enjoyed the narrative of the first period more than the second period. I have family history from the Netherlands and knew very little of the German Occupation.

Story fascinating, but it is the Army Air Corps

The book made me love and better understand my father's time while stationed at the same base. The reader was excellent in her voice characterizations, you knew the character by the voice. But, there's always a but, historically it is correctly known as and what the soilders referred to it as the Air Corps. The use of the phase Air Force wasn't until the 1950's when it was separated from the Army. This my career Army Air Corps then Air Force father would explain whenever someone used the phases interchangeably.