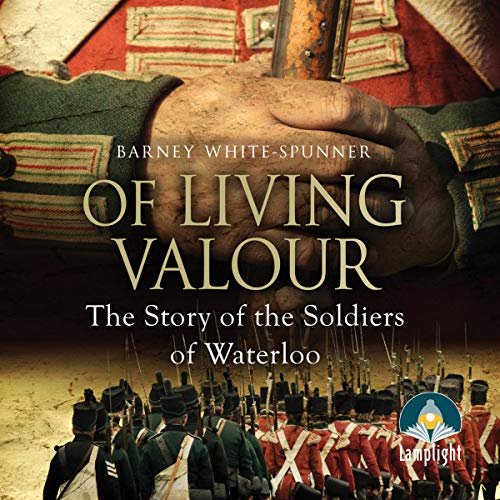 Of Living Valour: The Story of the Soldiers of Waterloo

By: Barney White-Spunner
Narrated by: Tom Morley
Try for £0.00

Told by the soldiers on the ground, this is the story of the against-the-odds triumph of the Battle of Waterloo, through real-life accounts of the regimental officers and soldiers whose bravery and resolution achieved victory.

Ex-Commander of the British Army Barney White-Spunner tells the story through the experiences of those who fought there and their families, using letters and diaries, and offering his unique perspective on the events. The story focuses on mens’ personal feelings and their relationships, with each other, their families, their leaders and their enemies. It tells the stories of their lives, what they had left behind and why and what they went back to. It vividly captures their daily routine, their life in camp and how they fought at first hand, their fear, excitement and exhaustion.

The Battle of Waterloo was one of the most significant ever fought by a British army, but it was also one of the most bloody with about 50,000 men losing their lives over three days. What was it like for those who fought and for their families waiting at home? This is their story.

What listeners say about Of Living Valour: The Story of the Soldiers of Waterloo

As somebody who loves history , this period has never caught my attention. however after listening to this great account of the events leading up to and the battle itself ,I am now fascinated with the Napoleonic period . what made this book for me were the little snippets of 1st hand quotations taken from the actual soldiers on the ground ! fantastic!

Great history of the battle.

even if you know that battle and have read multiple accounts, as I have, this adds much and is worth every minute of the listen.