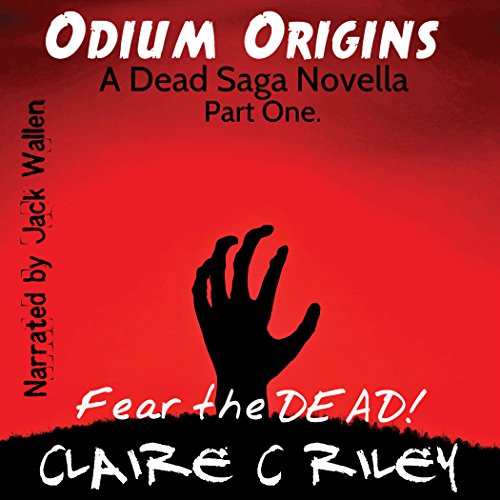 When hell claws its way up from the dark depths of the Earth, and the dead begin to walk again, for several people the zombie apocalypse doesn't just mean the end of the world as they know it, it is also the beginning of a brave new life for them. For some it offers freedom, for others a deeper torment and unforgiving life than they ever thought possible.

The coward, the street rat, the hero, and the lovers, everyone has their place. What really decides their fate in this new existence, nature, or nurture? Who they become when the world goes to hell is the true decider on their own humanity, and will ultimately decide their fates.

Forever changed, they have to learn to adapt to this dangerous and dark new world before they become one of the living dead themselves.

Odium Origins is an accompaniment to the novel Odium. It contains several short stories featuring some of the characters that you loved to hate from the full length novel, Odium.

What listeners say about Odium Origins. A Dead Saga Novella. Part One.

Back stories to Odiums cast

What made the experience of listening to Odium Origins. A Dead Saga Novella. Part One. the most enjoyable?

I would say the narration and the backstories of the charactors we love and love to hate in odium.

I like that this novella helped us to understand why some of the characters act the way that they do in Odium.And it lets you know what life was like for the individuals.Steve & Jane,JD,Amy and Ben as well as Crunch & Mickey.

What does Jack Wallen, Jr. bring to the story that you wouldn’t experience if you just read the book?

Jack Wallen does a wonderful job at narrating.He always speaks clearly, at a level you can hear. He doesn't fade out when he does the female characters voice , like so many others do.He brought the story to life in a pleasing manner.

I probably felt concerned about JD's perdicament the most.

I used the sync with the ebook and Audiable,that made it nice. I could still hear the story while I was busy multitasking.

Two sides to every story

What was one of the most memorable moments of Odium Origins. A Dead Saga Novella. Part One.?

The laundromat scene with a certain marital aid. Hilarious and sad at the same time. If you ever wondered if it would make a good weapon.. you will have to listen to figure out what I am referring to. :)

What does Jack Wallen, Jr. bring to the story that you wouldn’t experience if you just read the book?

Jack has a smooth voice. It was a bit odd hearing him narrate a female during a quick sex scene, but after I got over the giggles at that, I loved listening to him.

This book was an amazing twist. Listen to Odium first and get your view on the characters. Then listen to this and prepare to have your mind completely twisted around. I absolutely loved this book. People are not always as they seem.

Usually novellas are just fillers for the main series, but I felt these stories carried themselves independently in the sense that each story had the full essence of a proper book; introduction, buildup, character depth, climax, everything you'd pay good money for in a real book. Except the stories were short.

I love apocalypse beginnings, how the characters react to the first zombies. Unlike many books, these characters don't play dumb or feign disbelief and quickly conclude that the dead people walking are zombies.

We get to know the characters in a totally new way as compared to the main series and made me reflect on the main story differently. It was a poignant moment for me. I really liked these characters. Even Crunch.

The narration was great, but as others noted Crunch took some adjusting to get used to. I also think she sounded more gruff than Mikey.

It was very fascinating to get more insight

This is the first novella with the back stories of several the characters we meet in Odium and I’ll admit at first I was not sure I would like it as the first story we get is Crunch…..I so did not like her but…..after listening to her story…I’m not going to say I like her, but I will say I understand better why she was the person we ended up meeting. Another character I did not like a whole lot in the first book was Duncan, I thought he was a coward when we discovered what he did in Odium, but now I dislike him even more….ain’t karma grand….

It was very fascinating to get more insight to the characters and have a better understanding of them. In hearing the stories I ran the gamut of emotions, anger, frustration, humor, sadness…..it’s the sign of a well told story when you get so invested in the characters.

Now for the narration….it’s probably not fair as I listened to this shortly after finishing Odium II and had the voices that Jennifer Reilly in my head….and when Jack Wallen started reading it just sounded wrong. So that aside he did read the story well, and he has a good voice for narration…it was just very hard to hear such different voices for the characters.

Overall this was a great listen and a great addition to the Dead Saga Series, I look forward to the next novellas with the back stories of the characters we meet as the series progresses.