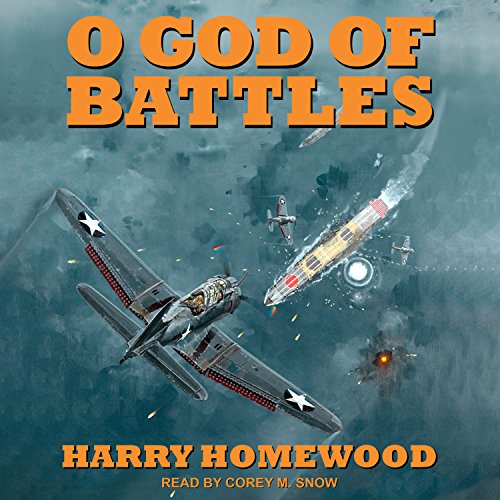 It was a time for America and her heroes: men like Michael and Andrew O'Connor, rival brothers fresh out of Annapolis, men who left all they knew and loved to seek glory in a world at war. Mike beneath the ocean aboard the USS Tigerfish, Andrew in the air as a fighter pilot ace. Theirs was a baptism by fire, yet they rose to confront a brutal enemy across the sea-and to chase the explosive dreams that could ultimately destroy them.

From Harry Homewood, best-selling author of Final Harbor, Silent Sea, and Torpedo!, comes the epic novel of a family at war. A novel of family, duty, pride - and of two brothers, competitors in both love and war, whose inner struggles provided them with the courage that could mean the difference between life and death.

What listeners say about O God of Battles

good !listen for long drive a cross country, characters came to life and story hinged on actual history. thanks,

Great Book, Great Story, Great Narration, what else can I say this book flows so glowingly and the story unfolded so very very well it would be hard to say anything negative about this book...

as a catholic,I got a kick out of this book,

I went to the same kind of high school as Andy,..The Jesuit priest always said that stuff about sex was to product children ,LUST ,;;; The Catholic Religion is the only true Religion, BUNK. .well they were wrong,wrong,wrong ....Once you read the bible on your own,it,s clear CHRIST is the answer.....anyway,I loved the book,only wish there was a follow up... Also liked the part of Micheal dealing with the worm Capt. T. Prescott Sammon. Michael is so strong & healthy...and a Great submarine Captian..?..This book is so good and with Corey M. Snow narration, I listened to it twice,,the n a month later ,listen again.....GREAT BOOK ! ! ! !

The Hardy Boys go to War.

Good, well written and engaging combat sequences interspersed with insane and superficial characters worthy of a 1940s teen novel. Ending is predictable. I liked the Hardy boys as a 10 year old, but seriously out of place in a war novel.

War in the Pacific Revisited

Over the sea & under with the Hardy Boy twins. Good combat story together with wholesome romance (and a little very passé strict Catholic guilt thrown in).
Enjoyed it a lot.