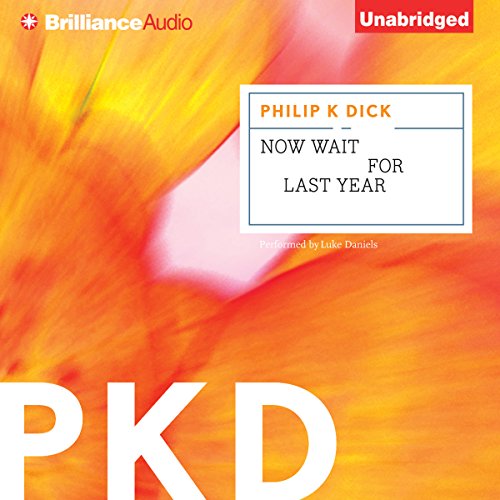 Earth is trapped in the crossfire of an unwinnable war between two alien civilizations. Its leader is perpetually on the verge of death. And on top of that, a new drug has just entered circulation - a drug that haphazardly sends its users traveling through time. In an attempt to escape his doomed marriage, Dr. Eric Sweetscent becomes caught up in all of it. But he has questions: Is Earth on the right side of the war? Is he supposed to heal Earth’s leader or keep him sick? And can he change the harrowing future that the drug has shown him?

What listeners say about Now Wait for Last Year

Can you make the world right?

Philip K. Dick has become well known for his books and short stories that have been turned into sci-fi movie blockbusters such as Minority Report, Total Recall, and maybe most famously Blade Runner. However this novel with its intragalactic war, time travel, and aliens will probably never be turned into a huge moneymaking movie. It’s because despite all the outward plot devices that seem ripe for action movie plunder, this book is about an internal war – a war about the depths of love and what is required of that love. PKD takes the reader to a place they may not want to go in a pulp SF novel, but for those who cross through time, you need to get there.

The book follows the story of Dr. Eric Sweetscent – a organ transplant specialist that is hired to keep the very rich alive. His wife is an antiquities merchant with a specialization in the mid 1900’s. She loathes him and he is tired of her, but the lasting afterimage of their love for each other keeps them tenuously bound together. They live during a war between two developed interstellar species the Starmen who are allied with Earth and the insect-like Reegs. Eric is drawn into the thick of the political intrigue behind the war when he is assigned to keep the leader of Earth alive.

While Eric is gone, his wife experiments with a new drug JJ-180 that has the side effect of sending the user through time. Unfortunately it is lethal and completely addictive. Eventually most of the main characters are using the drug to try to find something in the past or the present to help them overcome their situations – whether it’s winning the war, becoming wealthy, or healing relationships. PKD drives the story with action and quick pace while jumping in and out of time. The battlefield is always shifting, but can Eric find a reality that is the one he wants?

Was there a golden time in your past? Do you think the future must be better? If you could have everything just as you want, would it really make your life better. Phillip K. Dick wrestles with what it means to be happy and what the nature of true relationships are. Unlike any book that I have read – with outlandish backdrops and political intrigue – Now Wait For Last Year sticks the point to the reader: do you need everything perfect to determine your happiness. Life will never be perfect. Enjoy what you have and forget about the what-might-have-beens or the what-could-bes. Find the way to make this life enjoyable.

Again, this may be more than you’re looking for in a science fiction novel. There’s many things going on in this book that make it very entertaining reading, but you’re going to be left with a question in your heart about your enjoyment of life. Make the answer “Yes.”

Audible Listeners: Luke Daniels does a decent job. He's not my favorite narrator, but he does a good enough job not to lost the impact of the story.

"Life is composed of reality configurations so constituted. To abandon her would be to say, I can't endure reality as such. I have to have uniquely special easier conditions."

This is a book for married couples (having difficulties), suicides, drug addicts, politicians, and time travelers -- and it just happens to be one of my favorite PKD novels ever (although ever with Philip Kindred Dick is always a fluid thing).

'Now Wait for Last Year' is something rare: a selcouth piece of pulp that if judged by its cover or sales (I'm guessing here), could easily be discarded. It is always a joy to find a book that resonates with you in a visceral way in a place you weren't expecting. This book really is the last/best self-help book for couples and suicides.

I thought this was just going to be another middle-of-the-road, funky, throwaway PKD from the mid-60s (1966 to be exact). Look, there are definitely better written Dick novels, but for even mild fans of this amazing author, I would definitely check this one out. There is a unpretentious sophistication and depth to it that some of his messier, early novels lack, but there is also a helluva lot of heart. It really is something haunting to finish a novel where you can almost smell and taste the chemical density of the blood the author pumped into the ink on every page.

written at the peak of his powers... Incorporates most of the facets that make his other fiction so enjoyable

For me this book is different than anything I normally read.

I really enjoyed the story and the narrator.

The Ending made me smile. One of those ah ha moments you get when a great writer gives you a tidbit about life

still waiting for something to happen

I kept listening, hoping it would get better. It never did. It wasn't bad, just not engrossing or terribly thought provoking.

As an admirer of P.K. Dick

I am listening a second time.
more closely this time.
I love the story line, yet I seem to get a bit fuzzy in trying to make the links. OK so whats new about this, and PKD?
Usually I can follow the involutions and almost dreamlike shifts of PKD and I am curious as to why I seem to miss some linking threads in this story. Hence my second listen, so soon after the first.
For newcomers to Dick, I would suggest either 'Flow my tears the Policeman Said' or 'Dr Bloodmoney'.
So this is about much more than 'Alien' invaders who have become the masters, highly addictive drug induced time travel, coexisting alternate realities, high tech body repair and replacements and even well developed AI robots. There are well disposed other Aliens and a man separated from his wife travelling on a quest. There are ethical and fellow AI concerns for so called defective pupose designed AI and delightful responses that a human could call humane.
If you know PK Dick, and really like his work you will not be disappointed.
PK Dick was an extraordinary writer.

A story that stays with you.

Modern, and as the story goes, it plays without being redundant on the subject theme. Even though it's not long, it knows when to end – but the ending has a deep & insightful insight – that is good to remember. PKD delivers.

Very nice. It has the things that shine in PKD’s work. I recommend it. The voice talent is tops.

I listen to this story twice. The first time was to kill time. The second time was the same as the first except I didn't remember listening to this one until I got half was through it and then it was ok to listen to it again. Luke Daniel's is a good narrator for SciFi along with Scott Brick in other novels I listen to and their names are starting to stay in what brain cells I still have in my head. So keep those great SciFi novels to come this way with authors of good quality and imagination.