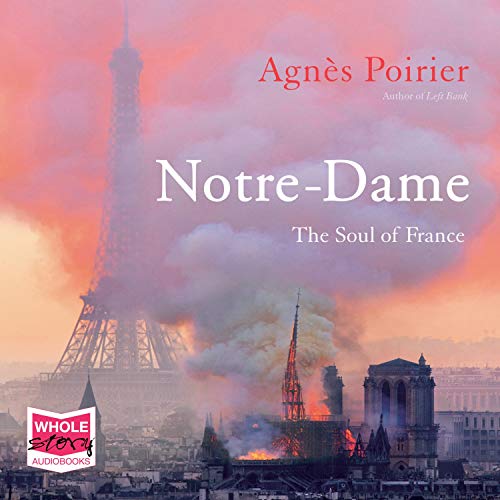 Notre-Dame: The Soul of France

By: Agnès Poirier
Narrated by: Jilly Bond
Try for £0.00

The profound emotion felt around the world upon seeing images of Notre-Dame in flames opens up a series of questions: Why was everyone so deeply moved? Why does Notre-Dame so clearly crystallise what our civilisation is about? What makes ‘Our Lady of Paris’ the soul of a nation and a symbol of human achievement? What is it that speaks so directly to us today?

In answer, Agnès Poirier turns to the defining moments in Notre-Dame’s history. Beginning with the laying of the corner stone in 1163, she recounts the conversion of Henri IV to Catholicism, the coronation of Napoleon, Victor Hugo’s 19th-century campaign to preserve the cathedral, Baron Haussmann’s clearing of the streets in front of it, the Liberation in 1944, the 1950s film of The Hunchback of Notre-Dame, starring Gina Lollobrigida and Anthony Quinn, and the state funeral of Charles de Gaulle, before returning to the present. The conflict over Notre-Dame’s reconstruction promises to be fierce. Nothing short of a cultural war is already brewing between the wise and the daring, the sincere and the opportunist, historians and militants, the devout and secularists. It is here that Poirier reveals the deep malaise - gilet jaunes and all - at the heart of France.

What listeners say about Notre-Dame: The Soul of France

Absolutely perfect. Kept me on the edge of my seat with the update of current events and learning the history of Notre Dame was written in such an interesting way!

Lovely writing marred by an over-the-top reader, I'm sorry to say. I enjoyed the story of Notre Dame, which I had the pleasure of visiting three times before the fire. The writing took me right back to that incredible building and gave me a greater appreciation for it and its place in the history of Paris and France. (I also recommend the author's book on the intellectual life of the Left Bank.) The problem is the reader. She drops her voice a couple of octaves whenever she reads a quotation and puts on a solemn, sonorous, sometimes sad, haughty, or bemused air that completely distracts from the quotation and the narrative. It gets worse as the book goes on. I powered through, because the story was so good. I would have given up, otherwise. I've heard other readers do this for quotations, sometimes even using a fake French -accented English for quotations from a French speaker. For the love of heaven, stop, please! The writer gives readers verbal clues, most times, about what words are quotations and a simple pause before a verbal-only quotation would do the trick for the listener. Female readers should not lower their voices when quoting men. Male readers would be called out (and rightly so) for using high, fluty voices when quoting women. Grrrr!