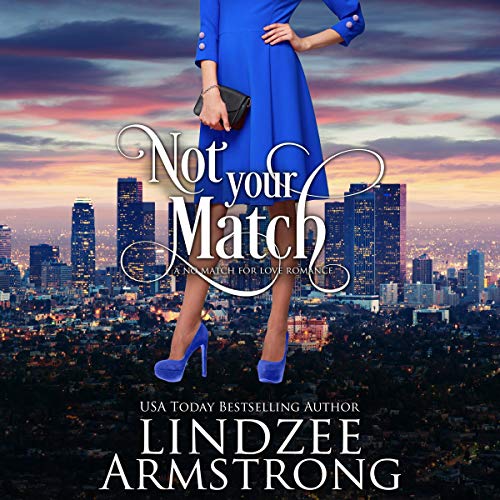 Andi doesn't believe in matchmaking. But when her best friend buys her a subscription to Toujour, a professional matchmaking service, she agrees to give it a try. She's matched with a celebrity client, but he can't make her heart flutter or her limbs turn to mush the way Ben, her best friend's brother, can with a simple smile.

When Ben's fiancée calls off their wedding - for the third time - he flees to Los Angeles, desperate for a new beginning. He moves in across the hall from Andi, his high school ballroom dance partner and his sister's best friend. Despite nursing a broken heart, his long-forgotten crush flares to life. He's just beginning to believe he can move past his breakup, and maybe even ask Andi out, when his ex-fiancee shows up on Christmas Day, determined to win him back.

Dating the wrong people has convinced both Ben and Andi that what they really want is each other. All that's standing in their way is a fake boyfriend, a jealous ex-fiancée, and being afraid to risk their hearts.

was not disappointed her books are great my granddaughter loves them the narrator is great this book is for the young but it is great for any age even me at 71 years old I received this book free for a honest and unbiased review from the author ,narrator or publisher via audio book boom .

I was provided this audiobook free for an honest review. That wasn't hard to do. This was a great book and great series. I loved the light hearted theme. I loved the way the author took off from another character yet tied it to the first book. It was a fast, easy, interesting, entertaining book. The author did a great job with the story and the characters. The narrator did a great job of distinguishing each of the characters and passing on their their individual charms. I will look for more by Lindzee Armstrong.

Great addition to the "No Match for Love" Series

Lindzee Armstrong is one of my favorites writers. Her stories are fun, entertaining , and can be enjoyed by any age group. I love how clean her writing is. I love the fact that this story tied up so nicely with her previous book.

Narration was done well. It was easy to distinguish between characters and her pace was excellent.

Andi is given a subscription to Toujour, a dating service, by her best friend and agrees to use it to appease her. She is matched with a celebrity from the previous book.

Ben is Andi's best friend's brother. They are old dance partners and have not seen each other for awhile. He has just gotten off of a serious relationship.

Andi's best friend annoyed me so much with her meddling! At least she saw reason towards the end.

I loved this book and would recommend it to anyone that enjoys a good, entertaining story. I'm looking forward to reading the next book.

I Love This Author's Stories

Andi and Ben were dance partners in high school and Andi is still friends with Ben's sister. Now in the working world they no longer have time to dance...Andi is working in her father's law firm working on divorces and pre ups and Ben is a teacher who just had his fiancée leave him. He's moved where his sister lives and runs into Andi.
Ben is filled with guilt and is a nice responsible man ( unlike so many of the heroes in books, at least until the heroine makes him into a better man). Adding in the difficulties of dealing with someone who is bipolar and yet living your own life.
Terrific narrator, loved her...perfect inflection, timing voice.
Recommend for an enjoyable listen!

What a Great Romance!

Narration, Tiffany Williams - Really Good! She has really good males - easy to differentiate characters and such a smooth and enjoyable voice. Nicely done!

Loved this story, I hadn't read the first one and I've read from other reviews that this ties in nicely with the first, I don't fell like I missed anything at all, but will definitely listen to the others in this series.

I don't know, this one just hit me right and at the right time. Full of well developed and endearing characters, and includes a story line revolving around mental illness - how it not only affects the afflicted, but those that love them. I think this embraces the stand that you have to live your life and you can't hold yourself responsible for the actions of others.

Really can't say enough about how much I loved Andi and Ben. Two really likable characters with a really meaningful romance. Really enjoyed!

I really enjoyed this this book, the story i great. The narrated was great, she really did a great job. Can't wait for the next book.

Would you consider the audio edition of Not Your Match to be better than the print version?

I loved the book but the audiobook just gave it life.

Which character – as performed by Tiffany Williams – was your favorite?

She did a GREAT job with all of them. Way to go Tiffany...

I enjoyed this story and will buy more from this author and I liked the narrator. All around good book.
"This audiobook was provided by the author, narrator, or publisher at no cost in exchange for an unbiased review courtesy of Audiobook Blast."

Not Your Match: No Match for Love

Andi and Ben's relationship was sweet to read about.

I loved how they re-connected after so many years, the slow burn.

Tiffany brings life to the story.
Her narration of both Andi and Ben was great.

Was Not Your Match worth the listening time?

Its a sweet, clean romance.

I prefer more steam in my books, but 'Not Your Match' had enough depth to keep the story interesting and the romance believable.

"This audiobook was given by the author, narrator, or publisher at no cost in exchange for an unbiased review via Audiobook Boom.”

Not Your Match: No Match for Love, Book 2

A sweet romance with more complications than any one couple should face in a lifetime. Andi and Ben were friends back in high school, now back in their hometown and unattached, will they find their way into each others hearts. His mentally disturbed ex, a rich businessman , and interference from family add to the challenge. It looks like I need to go back to the start of the series since I liked this so well.