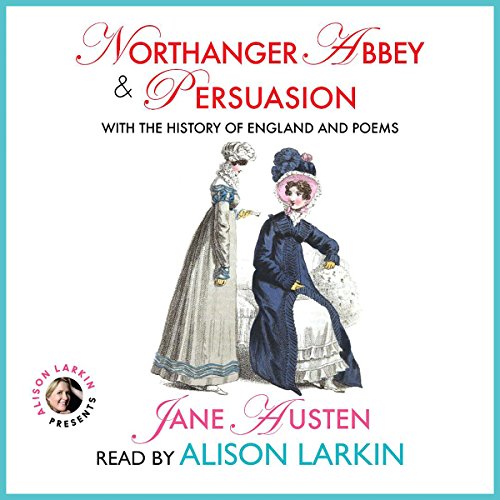 Northanger Abbey & The History of England and Persuasion & Poems

Northanger Abbey & The History of England and Persuasion & Poems

Award-winning narrator and internationally acclaimed writer/comedienne Alison Larkin brings depth and wit to this rich, hugely entertaining audio production of Jane Austen's last two great novels Northanger Abbey and Persuasion. The novels are followed by The History of England, a short satirical piece in which the teenage Austen writes about the kings and queens of England with less respect (and more wit) than any British newspaper, and Poems, a selection of lesser known, mostly comic verses that Austen wrote to entertain family and friends.

“This is a particularly enjoyable rendition of (Northanger Abbey) because Larkin understands that Austen was sending up Gothic novels and never lets the parody out of earshot.” (The Christian Science Monitor)

Alison Larkin has done it again! I absolutely LOVE this recording of two of my favorite Austen novels. The reviews are all accurate - it's a delight. Northanger Abbey is terribly funny. I had forgotten how funny it is - and in the hands - more accurate the voice - of the best Austen narrator out there it comes to life even more. What a gem! Persuasion always moves me. It moved me again this time and while I had read the History of England I had not read the poems which are included at the end. A real treat from start to finish. Bravo!