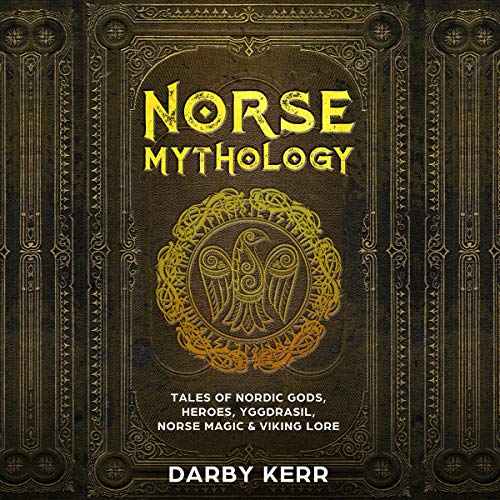 By: Darby Kerr
Narrated by: Christopher Knight
Try for £0.00

A storied race and a pantheon of lore, history, and culture, the Vikings reign as the Northern overlords of ancient history. Their stories, gods, and way of life has remained through the ages as a pinnacle of Norse success and the romanticism of their unique, domineering, swashbuckling way of life.

However, Norse culture goes beyond the deeds of the battlefield and has imbued our own culture with prose, poetry, feats of heroism, defeat, and deep thought about the role of the pagan culture in a rapidly changing world.

The tales of triumph and conquer by the Viking race have stood the test of time and left an indelible mark on world history. Now is the time to hear for yourself the beauty, wonder, ferocity, and heroism of true Norse legend like it's never been heard before.

Introducing Norse Mythology: Tales of Nordic Gods, Heroes, Yggdrasil, Norse Magic & Viking Lore, a comprehensive guide to the majesty, mystery, and mythology of one of the world's most famous and deeply treasured cultures. Delve into the world of heroes, gods, bravery, and might, and get swept away today!

Here is a preview of what is included:

Get your copy, and begin listening today!

What listeners say about Norse Mythology

Not worth a read even for beginners

This is meant as a book for beginners, with no prior knowlegde; and it is very simple. But even for a simple book it fails miserable. It's a book with so many mistakes and unforgivable false facts, that is so overwelmning, it overshadows the few things it got right. An example is the mentioning of Snorri Sturluson as Irish when he was Icelandic.
Another example is where Kerr explains Innangard as part of the mythological world, when 'Innangard' is ONLY mentioned in two scandinavian lawtexts, where it states that to commit arsen is worse innangard (inside of a house) than utengard (outside of a house). In short, it has nothing to do with the myths or the faith of the pre-christian scandinavians, as Kerr claims.

Neither the author nor the narrator has done their homework!

Overall an embarrassment, and waste of money!

I am of Scandinavian/Norse and Celtic ancestry and am always eager to learn more about my roots and even spiritual side. When my Norse and Celtic ancestors came to the US there is legend of mixing with the Native American Indians as well.
I liked this short summary and think it was well organized and very informational. I wish they spoke of Freya and Frigg further. The mention of the familiars (what that actually means) of the gods and use in shamanism or animal totems was brief and only mentioned the boars of Freya and Frigg, which is good, but did not mention the felines with Freya or how the creatures specifically helped the the deities with their journeys. It mentioned in general but was not specific with examples and and it did not draw a line over to similarities of the Celtic Druid animal totems and uses as guides or help with their divination or relate it over to similarities in other cultures such as in Native American, African, Indian etc. I know this book was not about that but it does fascinate me and make me wonder why all of the similarities as the book touches on some of them and provides a brief history. I recommend this book for a good brief overview. I wish also that it spoke more about runes and their use and meanings. It does touch on runes briefly but was I taught that they have multiple deep meanings as well as alphabet for general correspondence and shapes/symbols varied slightly from Germanic to Norse to French regions. I learned that women and men could use them alike (not more men or than women used them) as tools for divination, healing etc. but that some runes were more either masculine or feminine and pertained to specific entities (gods/goddesses/giants/elves/fairies etc.) and or of the 9 realms (worlds/physical lands) and creatures at a couple of levels of meaning.

Really wanted to get into the myths more. This was a decent overview that gets you familiar with the main players and names, but in the end I don't think I've gotten into the mythology. Kind of like window shopping.
The performance was clear, and understandable; although, I'm not sure if he was interested in the content he was reading. A portrayal of interest would have been better for getting into the text.

I don't recommend this book. The writing is very dry and several portions repeat themselves. as much as I like to know the history and culture surrounding Norse mythology I would have also liked some stories to have been included. I don't believe that it is possible to talk about a culture without telling its stories and this book only eludes to them

Very informative book. I know I will be listening to this a lot. I hope I can find more like it.

This is the first time I’ve actually gone

This is the first time I’ve actually gone into Norse myths (I’ve generally enjoyed Greek mythology more). I would totally recommend this - an easy read, made up of different stories so it’s relatively easy to put down and continue, not that you’d want to once you start this.

The tales of the ancients, in the voice of a phenomenal storyteller. Great read if you like Norse Mythology, and more-so if you're a fan of Darby. These are heavy tales to tell, and Gaiman does a masterful job of detailing and defining Who, Where, and Why these myths are vital to the entire fabric of storytelling.

This book was very interesting

This book was very interesting and really got imaginative with providing details of how certain Norse Myths came to be. I really enjoyed the storytelling and the humorous cause and effects of the adventures of the gods.

It's also a quick listen.

It's also a quick read. I got through it in a single day, though the chapters are well suited to picking up and putting down since the stories are fairly self-contained.

My daughter says this book is awesome. If you want your child to enlighten you with Norse mythology facts, then this is the book for you. It compliments the Greek mythology books well also. Nice book

It's also a quick read. I got through it in a single day, though the chapters are well suited to picking up and putting down since the stories are fairly self-contained.