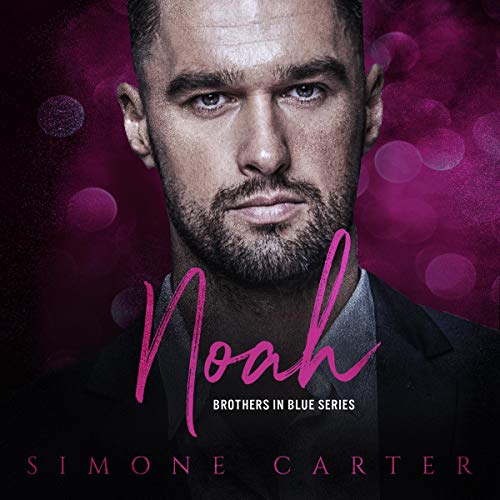 Jenna Harris is a wedding planner who doesn’t believe in fairytales...at least not for her. When police officer Noah Baker comes on the scene, she begins to wonder if she’s been mistaken. But there's no time for romance, even if she wanted it.

Jenna took custody of her half-brother, Lucas, after the death of her father and stepmother. Now she’s busy launching her business and raising him at the same time. But something's going on with Lucas....

He's involved with a bad crowd and up to no good.

Can Noah intervene and convince Jenna that sometimes fairytales do come true?

Noah is the third book in the steamy Brothers in Blue series.

Warning: These stories contain steamy scenes and are not suitable for all ages. Listeners 18 years of age and older.

What listeners say about Noah

Short, sweet with a surprisingly amount of action

First of all, this is the third book in the series and I recommend reading or listening to the other books in order before hearing this audiobook. The series is about three brothers (who are all cops) finding and fighting for their women. Without a bit of context, mostly because both characters appear in previous books, Noah and Jenna's budding chemistry comes out of the blue and feels a little farfetched.

That said, for such a short audiobook it has a little of everything: vulnerable characters with interesting backstories; romance; action; and sex. Noah and Jenna's relationship even goes through the expected struggle before they finally achieve their HEA. This book is light and easy to listen to, though I think I enjoyed it more because I had heard the other books first.

I've listened and loved all of the brothers in blue series , this one just like it's previous stories does not disappoint, it's written so well and narrated perfectly , can't wait to listen to more from this author and narrator!

this series has been really good. I look forward to reading more by this author

Is it just me or have the names been changed and story rearranged. First, male dead set against relationship. Them they are the first to say I love you. Come on, we deserve better. The first was good but to repeat the story as a series was unfortunate.

I love that there is a little bit of everything in this book. This book has well-written characters and a lot of action. Its a great story and I'm sad to see the end of this series.

I absolutely love this series!!!
I wish it could go on. each story has sucked me in and never wanting the book to end.
These books were written fantastic.
I highly recommend anything from this author!!
I received a free review copy of this audiobook, however, my review is unbiased and voluntary.”

I listen to all three books in two days. listening to them all in a row there is one part in them all that is almost the same. bad guy kitchen food bathroom.
overall the books and the characters are well written. The narrator is doing a good job gets little whiny in times and it makes me feel like the character is week she is not so stop it. whiny women are not what we need.
Thanks for the opportunity to listen to the book free. I will love to see more from the author.

I have enjoyed listening to this Brothers In Blue series but I think of all the lovely Baker brother Noah is my favorite. Simone Carter has written three perfect book boyfriends.

Noah's story starts when he enters a store to find Jenna being held at gunpoint by a would-be robber. Thankfully Jenna's quick thinking and his steady hand save the day. Noah and Jenna already know each other as she is the Wedding Planner for both his brother's upcoming weddings.

This book features all of the characters from the first two books, it could easily be enjoyed as a standalone because there is plenty of Noah and Jenna's background given by the author before they start dating. Although Jenna is a wedding and event planner she doesn't believe in romance for herself, she has survived an abusive marriage, her former husband having been shot by the police. She blames herself for allowing the abuse in the first place.

Noah believes that there is one special woman for him, and Jenna is it, I enjoyed listening to Jenna lead Noah on a merry chase. Thankfully his patience and determination won her over, who could resist him, he's thoughtful and caring, he's handsome and makes her feel special and he didn't give up until she was his despite her inner fears.

Along the way Jenna's brother causes problems for her as he is involved with a drug dealer who had made up his mind to have Jenna even if it had to be rape - he truely was a horrid man. Thankfully Jenna has an inner strength which she can and does draw on.

This was an exciting and steamy read perfect for any fan of romantic suspense, I did have one little niggle though, the cover of the book shows Noah as having short hair and he's not clean-shaven whereas, in the story itself, he has curls which Jenna enjoys running her hands through and running her hand along his smooth cheek.

Lissa Blackwell has narrated all the books in this series, which has meant that the continuity between books is flawless, but she doesn't use a different voice for each character which is something I like. That said the combination of Carter's skillful writing with Blackwell's smooth narration makes for a very enjoyable audiobook experience.

I have really enjoyed the first two books in this series and this one did not disappoint!! Such strength and love these two have for each other that once you start listening you will not be able to stop until it is over. I love the beauty in the writing as well as a wonderful narration.

Noah is the third and final book in this series by Simone Carter, and I am going to miss these yummy Baker Brothers. Carter really knows how to write the perfect book boyfriend, and Noah achieves this status with his strong, stable outside and soft, sinful inside. This book features all of the characters from the first two books, but I think that it could easily be enjoyed as a standalone because there is plenty of introduction of Noah and Jenna's background before they actually start dating. Jenna is a wedding/event planner who doesn't believe in romance for herself after an abusive and tragic marriage to her former husband. Noah is just like his brothers and believes that there is one special woman for him, and Jenna is it for him. I enjoyed watching Jenna lead Noah on a merry chase, but he patiently and determinedly wooed her until she couldn't resist. Add in some drama from Jenna's brother becoming involved with criminals, and you have an exciting and steamy read perfect for any fan of romantic suspense.

Lissa Blackwell narrates all the books in this series, so that continuity smooths the transition between books. Blackwell has a very pleasant voice, and, although she doesn't use different voices for each character, I followed the story without problems. Teaming Carter's skillful writing with Blackwell's smooth narration makes for a very enjoyable audiobook experience.

I loved this book just as much as the first and second book in the series! Great romance. The narrator was great to listen to as well. I was given this free review copy audiobook at my request and have voluntarily left this review.

This is book three in the series but you don't have to read the other two to appreciate and enjoy this one. I loved the other two and now this one! This is a great series. It has romance, suspense, action and plenty of steam. This isn't a long listen but Simone Carter packs it full. The characters are great and the storyline well done. The narration was well done. I've listened to Lissa Blackwell narrate all three books and she has grown in her narration. Although she still sounded like she was in a room too big with nothing to "collect" sounds. It's better than the last book but still there. Overall, an entertaining listen that I will be recommending to my friends.