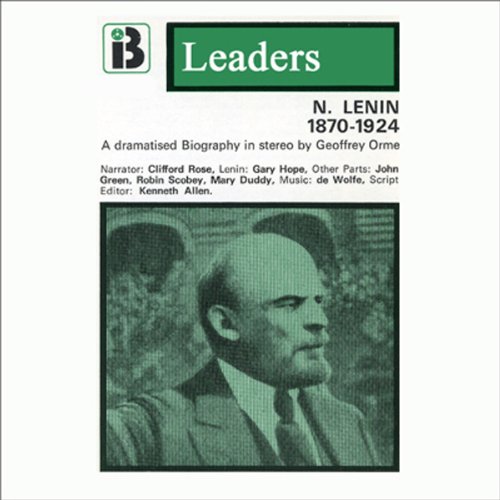 By: Geoffrey Orme
Narrated by: Clifford Rose,Full Cast
Try for £0.00

Vladimir Lenin was a hated, respected, feared, and fervently admired Russian communist and revolutionary whose "the end justifies the means" theories and other churlish social ideologies helped formed a dominant empire from the ashes of a damaged nation.

Some call Lenin a champion of the working classes; some call him a brutal, abusive dictator. The life of this highly polarizing politician is grippingly dramatized in Nikolai Lenin. Clifford Rose’s simple and noble narration, Gary Hope’s boisterous portrayal of the title character, and an ensemble cast collaborate to make this unstable turn-of-the-century world come vividly alive.

At the dawn of the 20th century there emerged a man with a burning zeal to sow chaos, and out of that chaos build a new conception of human existence. Lenin, the back-room plotter, revolutionary, lawyer, writer, and anti-God prophet of a new world order called communism, flourished in a world shattered and disillusioned by war. In the Soviet Union, his writings and sayings were sacred, and a Lenin quotation once brooked no argument. Yet his spell of power was brief and his end enfeebled.

The part of Nikolai Lenin is played by Gary Hope. Other parts are played by John Green, Robin Scobey, and Mary Duddy.

What listeners say about Nikolai Lenin

an easy to listen to description, albeit brief, well read and moving to the point of inspiration!

Would you listen to Nikolai Lenin again? Why?

Sure, it was a quick listen for a medium length

Truth be told, nothing stands out.

Not what I had in mind.

If you could sum up Nikolai Lenin in three words, what would they be?

What other book might you compare Nikolai Lenin to and why?

Have you listened to any of Clifford Rose and Full Cast ’s other performances before? How does this one compare?

These drama's are good mostly, but they tend to leave out important details a lot.

Would you try another book from Geoffrey Orme and/or Clifford Rose and Full Cast ?

Would you ever listen to anything by Geoffrey Orme again?

This book came off as an uninteresting and not very insightful textbook.