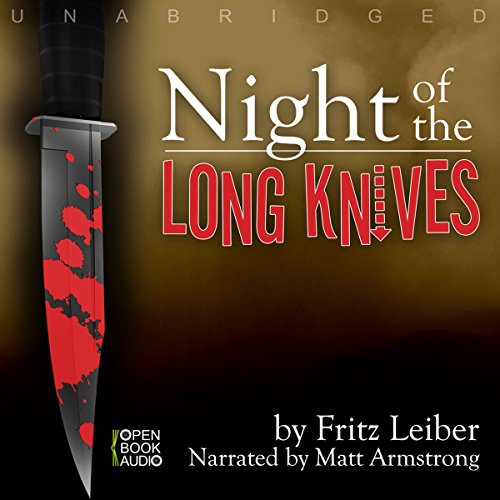 Night of the Long Knives

Night of the Long Knives

Ray and Alice are Deathland Buggers: the ones who, after the destruction of the world, found it impossible to interact with others, and became a race of wandering murderers. Far from being a conscious choice, however, Buggers simply can't control their inborn urge to murder, so they usually travel solo.

When Alice and Ray inadvertently stumble across one another in the Deathlands, they must decide whether to give into their urge to murder one another or not. Their dance of death is interrupted - first by a strange plane, appearing from the middle of nowhere, then by a chatty, congenial stranger named Pop who also appears from nowhere. Together, the three of them embark on a journey to escape from the Deathlands that has completely unintended consequences.

What listeners say about Night of the Long Knives

What a waste of my time, boring, tedious, crap story line. Narrator dreary. I feel abused!

Although from the golden age of SF this story sounds modern and fresh. The need to murder is expressed as a psychological malady, difficult if not impossible to counter. The story expands the reader's world view and makes comments on humanity and human behaviour. But it is the originality of the characterisations which makes this a brilliant novel.

Fritz Leiber is a master of story and language.

Fritz Leiber is a writer's writer, one of the acknowledged masters in his field. I have yet to encounter a Leiber story that was less than fully satisfying. His style draws no attention to itself, but pulls the reader or listener into the narrative.

"Murder, as you must know by now, I can understand and sympathize with deeply. But war? No."

After a nuclear holocaust, America is unrecognizable. There are a few cities left on the coasts, but most of America is now the Deathlands, where radioactive dust hazes the skies and radiation-scarred survivors try to stay alive another day. Besides devastating the land, the catastrophe has somehow warped the minds of the few remaining citizens of the Deathlands; they have all turned into murderers. They can???t help it ??? it???s a drive that can only be released by killing someone. Even when they band together for companionship, it always ends up in a bloodbath.

Ray has been on his own for a long time when he meets Alice, a woman who???s just as tough as he is. When the two of them decide, just for a while, not to kill each other, they come upon an old man and a hovercraft that seems to offer a way out of the Deathlands. Instead, they get caught up in a war between the sophisticated city dwellers.

The Night of the Long Knives, a novella by Fritz Leiber (one of my favorite writers), is totally absorbing. It vividly describes a horrifying possible future America where nuclear war has ravaged the land and the human brain. Leiber???s characters are pathetic guilt-ridden people who???ve learned that the only way to eke out a wretched existence is to kill anyone who gets close. There is no goal but survival, and those who???ve managed have their methods. Ray wears sharp metal dental implants, a lead-lined hat, and a knife he calls ???Mother.??? Alice, who is missing a hand, screws a knife into her stump and hides weapons in her hair. They circle each other warily, knowing that it can???t be long before one of them can???t deny the urge to kill the other.

Leiber uses his story to examine the mind of the murderer and to ask what it would take for a serial killer to change his ways. What are the influences of community, culture, and religion? How can a reformed killer get rid of guilt, make reparation, and help reform others? Another obvious theme, which was especially popular at the time Leiber wrote this novella, is the danger of nuclear war. The Night of the Long Knives is a grim story, but it doesn???t leave us in despair. I liked the note of hope at the end.

The Night of the Long Knives, which was originally published in Amazing Science Fiction Stories in 1960, feels surprisingly current ??? the character names are the most dated-feeling aspect of the story. The novella is now in the public domain, so you can get it free on Kindle, but I want to recommend the audio version which is 3 hours and 17 minutes long and is read by Matt Armstrong.