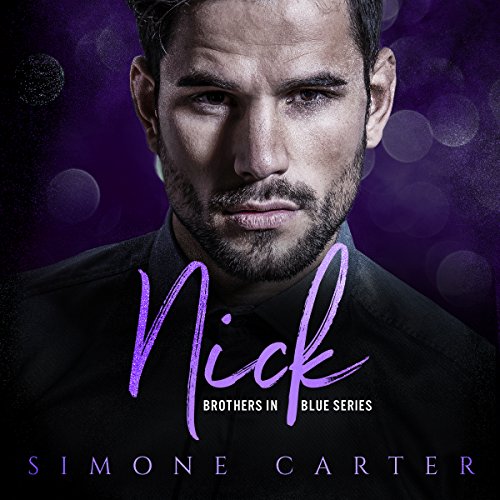 Darcy Campbell was a laid-off Chicago music teacher who took a job playing at a piano bar out of desperation. She’d had a run of bad luck and was already having another bad day...but it turned disastrous when she was the only witness to a mass murder. She watched in horror as her boss, his son, and other employees were gunned down before her eyes.

The police promised to protect her identity if she testified against the monsters who had committed the massacre. But her name somehow was discovered, and threats immediately fired in her direction. Detective Nick Baker promised to protect her, and when things got hot, he hid her away in his cabin in the backwoods of Wisconsin. Darcy wasn’t sure what the bigger danger was - the killer hunting her or falling in love with the man who vowed to protect her.

She couldn’t love a police officer. She refused to love a police officer. It was nearly impossible to resist him, though, with his intense, silver eyes and brawny body. He was like a drug, addictive and sinfully potent. Somehow, she needed to protect her heart from him while he protected her from the deranged killers.

Was she brave enough to confront both dangers?

Nick is the first audiobook in the steamy Brothers in Blue series.

Warning - These stories contain steamy scenes and are not suitable for all ages. Meant for ages 18-plus.

What listeners say about Nick

What I liked... the length: 3 hrs 11 min, because it was perfect for a quick listen while I did chores. The sexy brothers! The general story.

What was not so great... the cop who sleeps with a victim in his protective custody without thinking once about it being a conflict of interest? Hmmm... The abrupt ending. Gimme an epilogue or something.

The narrator for the audio version, Lissa Blackwell, was doing really good up until around Chapter 20. Her recordings have a hollow sound (not enough noise baffling where she records) and background noises (thumps on the table or mic, and a couple of playbacks.) Around Chapter 20 it sounded like she was rushing at times, and then breathing mid-sentence. I know this is all picky, but she has a lot more potential! This recording was made in 2018, so maybe it's improved since then. (I just noticed that she records exclusively for Simone Carter. Interesting.)

I'm looking forward to the rest of the series, and I'm hopeful it will jump up into the 4 star range for me. (From "liked it" to "really liked it".)

I received this title for free in exchange for an unbiased review.

The opening to this book is very intense in a good way. I enjoyed this story and found it very entertaining. Lissa Blackwell did a great job telling the story and bringing it to life. well worth a listen.

narrated perfectly , worth a listen

I loved the narrator in this , she really told the story well even the male parts were told really well , the only downside to the story was all the work up to keeping Darcy safe from a criminal and then when things actually happened we heard nothing else after , it was a bit like that part of the story had just dropped off and was forgotten , it was still a good story but I would have liked a bit more , glad Nick and Darcy finally worked things out tho
worth a listen

Simone Carter is quite adept at writing sexy, action-packed, romantic stories that cut out the superfluous details that can weigh a plot down. Nick and Darcy's story literally starts with heated eye contact and speeds up from there. Their connection literally parallels the level of danger that surrounds them.

Of course, boy meets girl, girl is in danger, boy saves girl is too unsophisticated for this story. There is an element of that basic plot structure but also so much more, including bacon grease, a skillet, sneaky friends and a seemingly insurmountable personal history.

This audiobook is easy to listen to and entertaining from start to finish. Lissa Blackwell has a pleasant narrative voice as well.

everyone loves a man in uniform so when Darcy witnesses a murder hot cop Nick steps in to protect her ! great book awesome job by narrator made story flow

NICK is a great example of the romantic suspense genre. The story features Darcy as the damsel in distress and Nick as the hero determined to protect her. Darcy witnesses a mass shooting and becomes a target of the killer when she agrees to testify. Nick is the police detective investigating the case and offers to protect her at an isolated cabin in the woods. This is the perfect setup for romantic seduction, and Simone Carter doesn't disappoint on that score. However, in addition to the romance and the action, this story explores Darcy's deep seated fears of love and intimacy from her tumultuous child hood. Between those fears and the flying bullets, the road to love for Darcy and Nick isn't a smooth one, but it is a very enjoyable ride to get there for the listener.

Lissa Blackwell did a terrific job with the narration. She handled Nick's deep, strong voice and Darcy's light, feminine voice with equal skill. She inserted the right level of emotion throughout the story, and she made a great book an even better production.

BOOK REVIEW.....
Good story. I enjoyed listening to it and look forward to more.

NARRATOR REVIEW....
The narrator did a good job

Don’t expect Nick to be the troubled past bad boy. He’s a cop from a family of good men. The beginning disaster seemed so rushed that it took away from the sheer magnitude of the incident. There wasn’t any connection to the people so I felt little remorse. But it was good that there wasn’t instant puffy hearts seeping from either Darcy or Nick upon their first meeting. When the danger picked up they found their lives joined in hiding. Which lead to joining in other ways, even though Darcy has a reason not to fall for a cop.

A sexy, steamy short story. Narration was spot on for the female voices but I didn’t care much for her male renditions.

👏🏻 Applause for entertaining me for 3 hours.
I was given this free review copy audiobook at my request and have voluntarily left this review.

Oh my, oh my, oh my!! A man in uniform rescuing a damsel in distress! Yeah, it's a great story with some steam! I really enjoyed listening to this book and thought it was well written with great character development. It's exciting from beginning to end. I think this is a great start to a new series and am looking forward to hearing about the other two brothers!! The narration was good as far as voices go but I felt like Lissa Blackwell needed to read it a time or two more before recording. She does add to the story but I feel like it could have been a bit better. Overall, an excellent story with good narration, well worth your time!

Great short story and start to the series!

I have a love/hate relationship with short stories. On one hand, I like that I can listen in one sitting (I like to listen at 1.5 speed) On the other hand, I want more! :) Great introduction to this family, good suspense, action and romance / tension. I'm hoping that we get to meet much more of the family in future books. Narration was good!
I was provided a free copy of this book via audiobookboom in exchange of an honest review.

I was intrigued by the storyline and I was not disappointed. This book included all of the mystery and suspense in promised in short, quick to read package. While I will say that some of it was a bit unbelievable for those that like their stories more realistic; I feel that is the entire point of reading a fiction novel and thus the bounds of believability are meant to be pushed.

Ms. Blackwell does a great job with narration and has a different cadence to her voice to set her apart from other narrators. I love that Ms. Carter set each brother with their own story line but was not afraid to introduce them in the first novel. Their family dynamic and love for one another is very alluring to the novel. I can’t wait to read more about Nick’s brothers and to see if Nick makes more appearances himself.

I was provided with a free copy of this audio book for my honest review. The views expressed here are entirely my own.

Exciting from start to finish I was happy to follow Darcy and Nick's romance. The writing is excellent throughout. Great voice talent and plot. Highly recommend.

Great story with a lot of steam rolled in for good measure!
Who could resist a hunky protector?
Very cool story, great narration, I thought it was short but definitely sweet.

I was gifted this audiobook for free & in return I offer my unbiased review . I enjoyed the pace at which the story flowed . I would have liked to have know more about those who were gunned down . Especially since everything followed on from that . But I enjoyed the slow seduction that ensued , there was a perfect blend of story & sex . Lissa Blackwell's narration was excellent , she added a great deal to this audiobook . I will definitely listen to more books from this author & narrator ..