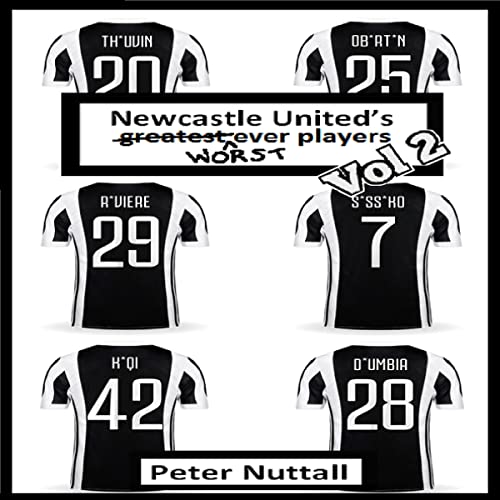 By: Peter Nuttall
Narrated by: Jamie McLean
Try for £0.00

They say that if you want to live a long and happy life, don’t support Newcastle United.

Have you cringed while watching the likes of Emmanuel Riviere and Luuk de Jong, trying to justify at least part of their colossal wages?

Have you sat, scratching your head, wondering why Moussa Sissoko and Gabriel Obertan are having as much effect on the match as....well....Florian Thauvin and Amdy Faye?

Have you found yourself waggling a finger in your ear, because you can't believe what actually came out of Alan Pardew's mouth?

Then, this is the audiobook you've been waiting for!

Join me, as I lead you on a journey through another hall of shame, littered with players who were paid far too much, and who gave the fans far too little in return.

I'll answer questions such as: "What was Kenny Sansom's best moment in black and white?"; "Who was the most 'Pardewed' player in the 2010s?"; 'How did Newcastle lose nine of their 10 professional penalty shoot-outs?", and "How did Newcastle get someone to pay £30 million for Moussa Sissoko?" (Actually, nobody knows the answer to that last question).

If you need an antidote to the many times Newcastle United have ever let you down and made you think "We'll laugh about this seven-to-three defeat in a few years", then this audiobook will go a long way to healing those wounds.

What listeners say about Newcastle United's Worst Ever Players