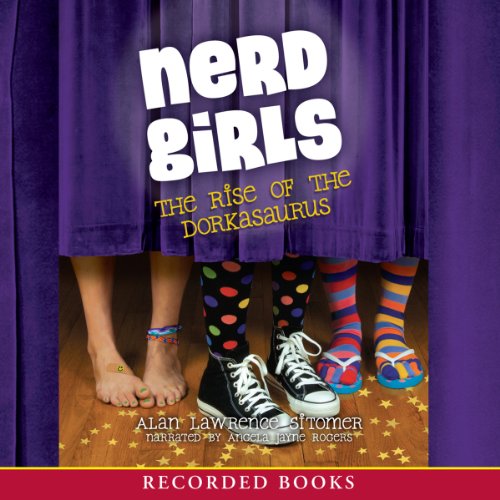 Nerd Girls: The Rise of the Dorkasorus

Nerd Girls: The Rise of the Dorkasorus

Award-winning educator and author Alan Lawrence Sitomer’s engaging young adult novels have been named among the ALA’s Best Books of the Year. This first tale in his planned Nerd Girls series follows 13-year-old self-proclaimed “dorkasaurus” Maureen and her fellow social outcasts Alice and Barbara. When Maureen discovers that the Pretty, Popular, Perfect girls are planning a mean trick on Alice, she decides it’s finally time to take a stand. Signing up to compete against the ThreePees in a talent show, Maureen plans her revenge.

The chunky chick doing the peanut-butter and marmalade mash has gotten over 1000 hits, as Maureen's friends would tell her. Maureen felt embarressed until she met Bean-pole Barbara and Alergy-Alice. The three of them, together, were to be known as the Dorkasoruses. When they found out that there was a talent show at school, they knew this was their moment to take down the 3-P's (pretty, perfect, & popular). Can the Dorkasoruses compete against the 3-P's gymnastic, acrobatic act? Find out in this terrific story of friendship, humor, and underdogs meeting the challenge.