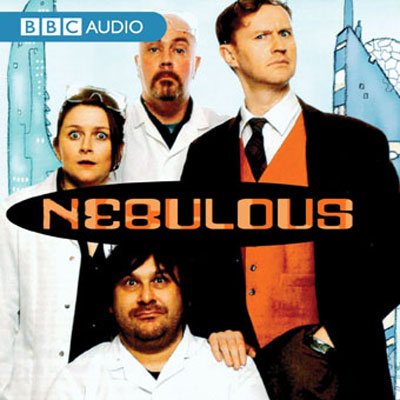 By: Graham Duff
Narrated by: Mark Gatiss,David Warner
Try for £0.00

The year is 2099 and Professor Nebulous (Mark Gatiss, League of Gentlemen) is the director of eco-troubleshooting organisation K.E.N.T. - the Key Environmental Nonjudgemental Taskforce. But it's so under-funded it subsidises its work by running a launderette. And the twintub's malfunctioned. In a post-apocalyptic England, cattle-clasm has wiped out the majority of the livestock, there are new months such as Octember and Janril, and climate change has formed a drizzly new season called Hamble. Nebulous is determined to get Mother Earth back on the right track, nevertheless he must pit his wits against sentient dust, killer cacti, naked aliens and the evil Dr Klench (David Warner, Titanic, Star Trek VI) who's bent on world domination. Can K.E.N.T. save the day before the spin cycle finishes? Nebulous also stars Graham Crowden, Paul Putner and Rosie Cavaliero.

"Doctor Who fans may well have found a new love-object." (Guardian)
"A winning blend of Doomwatch, Quatermass and British silliness that has cult written all over it." (Times)

What listeners say about Nebulous

The best new radio comedy since the Mighty Boosh

Download this brilliant comedy whilst it's still relatively unknown then feel smug and superior in a years time when you hear kids in the high street saying 'unlike you proffessor I no longer have the luxury of elbows'.
This is easily the best new radio comedy the BBC have put out in the last four years. Dr Who, Blake 7 and Red Dwarf fans will love it, but it's just as appealing to regular folks as well. The writing is as sharp as they come and the performances are pitch perfect. You'll listen to this brilliant series again and again.

Some of the best science-fiction comedy since Red Dwarf. Can't fault it. Still, it's a shame about the Isle of Wight though ... ;-)

Buy this, I promise you will not regret it.

I can't wait for series two.
My whole family is addicted to this, my daughter quotes it endlessly. My wife hit a patch of ice in the car the other day and all she could do was cry with laughter and say 'I'm drifting.'
All the characters are so well rounded and so beautifully played that you just can't help but love them, although 'PQ's my favourite, he's the quiet one.'
This is without doubt the funniest thing I have seen or heard for years.

Gets funnier as it goes along

I wasn't too impressed by the first episode, but carried on listening and found the series got funnier as it progressed. The characters need time to develop and there are several great running gags to anticipate.
I have now listened to all the episodes three times and giggle more each time!

Nebulous tells the story of KENT(Key Environmental Non-judgement Taskforce - and dry cleaning service) set after the Withering which destroyed the isle of White and caused Rory to loose... well everything.

If you like daft comedy, recurring gags and pseudo-science with a tongue in cheek lovable aside to those 1950's sci-fi radio dramas, this is for you.

Mark Gatiss is excellent as ever - its just a shame the second series isn't available.

This is one of those series that really needed a bit more work. The episodes are short and fun but there isn't a great deal to them and they could be cut and tightened quite a bit. Could be a lot better. You know the type where one guy writes but if you had half a dozen guys in a room they could perk it up a bit.
If it is cheap it covers a few short trips but not at full price.

reviews need to be a minimum length.

Mark Gatiss is brilliant as the clown haunted genius, very funny stories that affectionately twiddle with so many tropes of sci fi that I lost count of the references.

struggled with this. persisted many times. not sure what's funny about it 😥 complete waste of a credit.

All voice acting was fab. Mark Gatiss was brilliant. laughed alot. A must listen. loved it.

This is great fun

If you could sum up Nebulous in three words, what would they be?

Funny, Inventive, the whole thing is just good fun. If you like British humor, and I do, this series is for you.

Well I liked them all but Dr Nebulous he remindes me of the 4th Doctor Who.

Which character – as performed by Mark Gatiss and David Warner – was your favorite?

Harry. He didn't have a huge part but it was always funny.

The storylines are inventive and there is lots of humor. They all made me laugh.

This was well worth the credit. I hope there is a second series.

Would you consider the audio edition of Nebulous to be better than the print version?

What other book might you compare Nebulous to and why?

Perhaps another radio play which similarly delightfully silly is cabin pressure which is the closest I can come to this.

When Paula can't overcome her crush on Professor Nebulous and makes him uncomfortable by kissing his midriff.

No that kind of radio Play. Humor

What did you love best about Nebulous?

Harry. "UNLIKE YOU, I NO LONGER HAVE THE LUXURY OF HUMOR"!

Which character – as performed by Mark Gatiss and David Warner – was your favorite?

It's not the best of BBC radio programs, but entertaining nonetheless... Kinda what you'd get if you mixed Dr. Who and Get Smart... Then throw in some funny punning w/ Pop culture, science/medical, SF, and social references... I love Harry, he reminds me of Commodore Pike meets Marvin the android;). I'm not sure it's quite wortha credit though... Better to get it on sale...

This was not funny!

This was not funny at all. It wasn't even witty. I was hoping with mark being in it, it would be good, but was disappointed.

Good thing I got this on a sale. Otherwise not worth spending a credit on.

The performance was excellent and that really was the only saving grace this had. Once I figured out that laughs aren't probably going to come, I thought at least the story lines might be engaging. But there was nothing there either.

I will give this another listen to see if it grows on me.

the series was not funny because the writing failed to be clever enough to pull off the basic premise. as I listened it. just got more and more tedious as the sound effects grated upon the ear. Not what I have come to expect from BBC 4 radio programing.