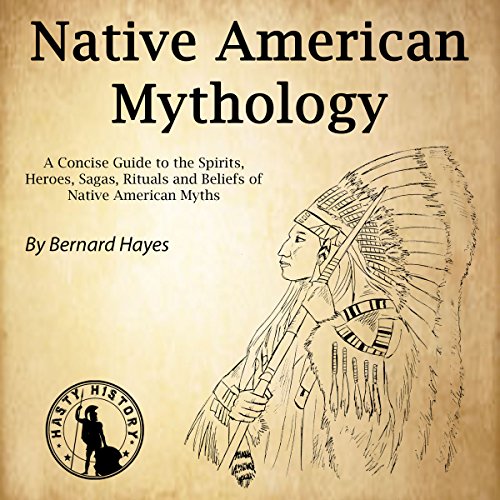 By: Bernard Hayes
Narrated by: Zachary Dylan Brown
Try for £0.00

Stretching from the north to the south of the Western Hemisphere, the indigenous Americans have a long-forgotten history, and with that, myths, legends, and stories that have been passed on through generations. Many of them were in tune with nature and had their rituals, beliefs, and mythological creatures. In this guide, you’ll hear about:

To get a grasp of the original inhabitants of the United States, Canada, and Latin American nations, it is crucial to understand the roots of where it all came from and what was going on in people’s minds before the European settlers arrived.

This poorly organized book randomly names spiritual figures from various regions and tribes one after another without any logical format.

This collection is a dry husk. The narrator, as well as the content, deliver a very dull retelling of Native lore that reads like someone listing inventory.
This book has no heart, all the gods, origin stories, and spirits, have been stripped of any character.

The book is perfect

I liked how it brought up different information on legends, mythology, and religions of a Native American culture and history book.

Learn something new in each chapter. An eye opener. The people were talking to me.

There seems to be no struct to this book just a list and stoping every once and a while to tell a story. It’s hard to tell where the subject matter shifts and seems to be all mushed together like a paragraph with out punctuation.

this was structured like research and not storytelling. not what I expected. not entertaining for kids.

too much too quickly

I didn't much enjoy the pacing. the stories start to blend together because there is hardly a pause between them. wish it felt more like story telling than reading off facts.

You can't ask for better!

I am currently world-building for a fantasy novel. I wanted to learn about Natives and add them into my story. I found out very quickly that Native "history" books, isn't real history. But triggered SJW's looking to sound off about how much the west sucks, and sprinkle in enough history to get called history. This just gives the history and spears the opinions, and after exchanging 2 other books, I will take some points I disagree on, for a sweet-sounding voice, and for a simple, and clear message. I wish more people would take your model.