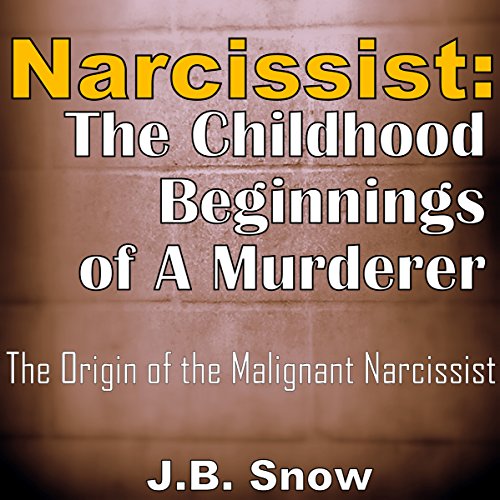 Narcissist: The Childhood Beginnings of a Murderer

Many people come across bullies in their lifetime. They might be bullied at work. There might have been bullies when they grew up in school. They might have encountered a neighborhood bully. They might have been bullied by a teacher, a coach, or another type of mentor. Some people might have experienced bullying from a judge, a police officer, or another authority figure. People who join the military often come across bullies who are drill sergeants, and they take pride in bullying people as their career. People experience bullies as parents and relatives.

Many of the people listed above can be bullies for one reason or another. They may be mentally ill. They may have a disability that they are embarrassed and ashamed of. They may have been beaten up and bullied by their parents, or other caregivers. They may lack empathy and sympathy which can often naturally drive a person to be a bully. But the bully that causes long-lasting scars in adulthood, is often the narcissist that a person experiences when they are in a relationship with that toxic entity.

The narcissist, though, is the ultimate bully. He is a bully almost solely to those with whom he enters into a relationship. She is the one who sees his bad side. She is the one who is present when he is moody, sick, paranoid, and not himself. She witnesses the dark sides of his personality, and the secrets that he harbors away from the rest of the world. She is the only witness to his narcissism because he knows all too well how destructive it could be, if the truth were to get out.

The worst of all narcissists is the passive aggressive narcissist who is a murderer in his own fantasy. He grows up, obsessed about killers and true crime. He will take money to do nearly anything. If he will be awarded an inheritance, he will be sure that you meet an unfortunate fate much earlier than you had originally planned.

The narcissist is a cold-blooded killer. He almost always gets away with his murder because he is cool, calm, and calculated. He never lets on that he knows anything. He will stare the cops right in the face, and he will lie about everything that he did. He will never break down, falter in his confession, or tell where the body is. He hides the evidence until he takes his last dying breath. He has no conscience, and thus he never suffers any guilt or remorse over the ordeal. He forgets about it almost immediately after he commits the crime.

What listeners say about Narcissist: The Childhood Beginnings of a Murderer