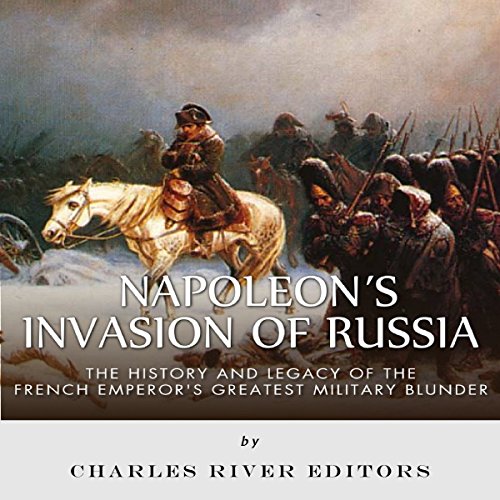 Napoleon's Invasion of Russia: The History and Legacy of the French Emperor's Greatest Military Blunder

By: Charles River Editors
Narrated by: Dave Wright
Try for £0.00

"The thunderstorms of the 24th turned into other downpours, turning the tracks - some diarists claim there were no roads in Lithuania - into bottomless mires. Wagons sank up to their hubs; horses dropped from exhaustion; men lost their boots. Stalled wagons became obstacles that forced men around them and stopped supply wagons and artillery columns. Then came the sun, which would bake the deep ruts into canyons of concrete, where horses would break their legs and wagons their wheels." (Richard K. Riehn)

French emperor Napoleon Bonaparte was not a man made for peacetime. By 1812 he had succeeded in subduing most of his enemies - though in Spain the British continued to be a perpetual thorn in his flank that drained the empire of money and troops - but his relationship with Russia, never more than one of mutual suspicion at best, had now grown downright hostile. At the heart of it, aside from the obvious mistrust that two huge superpowers intent on dividing up Europe felt for one another, was Napoleon's Continental blockade. Russia had initially agreed to uphold the blockade in the Treaty of Tilsit, but they had since taken to ignoring it altogether. Napoleon wanted an excuse to teach Russia a lesson, and in early 1812 his spies gave him just that: a preliminary plan for the invasion and annexation of Poland, then under French control.

Napoleon wasted no time attempting to defuse the situation. He increased his Grande Armee to 450,000 fighting men and prepared it for invasion. On July 23, 1812, he launched his army across the border despite the protestations of many of his marshals. The Russian Campaign had begun, and it would turn out to be Napoleon's biggest blunder.

What listeners say about Napoleon's Invasion of Russia: The History and Legacy of the French Emperor's Greatest Military Blunder

an accurate but rather dry tale.

it is important to note first off that I did enjoy this book. it was interesting, informative, and it told you everything that you would need to know about what is one of napoleon's most well known conquests/failures. but for me personally it was done in a manner that can be described as well, very text book like. it does remedy this some what by including small conversations and tid bits of detail which eventually forced me to give it 4 stars. but in short this is a very well put together Audio book and it is certainly worth your time and money if you are interested with the subject at hand.