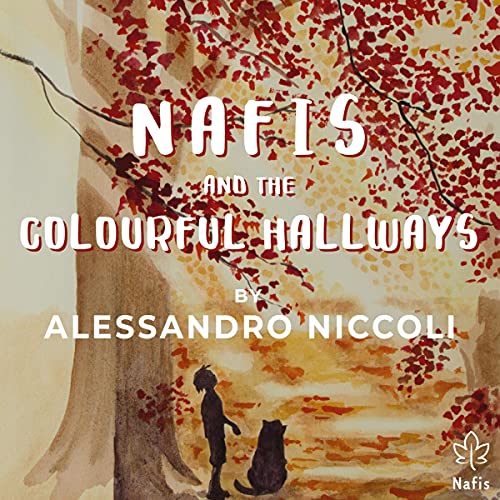 Nafis and the Colourful Hallways

This book is for children and adults in terms of the style adopted, the narrative, metaphors, and meanings.

Nafis is 13 years old, he’s skinny, has green eyes, and his hair is disheveled. He lives in a big city in Southern Europe.

It’s the 21st century at the beginning of a worldwide pandemic and the fourth technological revolution that mark a point of no return. Poor lifestyles, senseless consumption of goods misunderstood as happiness, pollution, and destruction cause Nafis to have a serious existential crisis. In this context, the boy experiences the rebellion of nature, which is the true protagonist of the book, in a whirlwind of emotions. One day, in a park in his smoky city, a ray of light strikes across his eyes and changes their color. From that moment onwards, Nafis decides to change his life; nothing will be the same again.

He returns to living in the woods in a continuous adventure with faithful human and animal friends, where they walk together listening to prosperous past and present lives, in the symphony of nature.

Nafis explores his dreams, imagination, friendships, and feelings, and gradually finds the strength that he had lost; he rediscovers the incredible abilities of the mind thanks to the energy he derives from his landscapes, which are masterfully illustrated.

Thanks to practicing ancient disciplines in nature, like a warrior, Nafis wages a peaceful war with words as powerful as swords, to awaken ideas, emotions and the masses, rediscovering a wonderful world that needs to be defended, towards a new era.

The 'novel' about Nafis leaves behind centuries of history and speaks to listeners of the 21st century. It tells us that another Earth is possible.

"There are those who fight with swords and those who use words as weapons. Words are powerful, for better or for worse, they create ideas, generate emotions and motivate the masses. Nafis is a warrior of words, he fights the injustices and ugliness in the world with love, by example and through his speeches full of passion, which touch people profoundly, to the point of awakening sleeping consciences. He does so calmly, patiently and respectfully, albeit imbuing them with all the strength of his soul and his love." (Maria Fancelli, Germanist, professor emeritus of Florence University)

"There is a subtle thread that unites all things, even those that appear to have nothing in common with each other. Being able to follow that thread is like turning on a light bulb in the understanding of events. Well, Nafis has found the tip of that thread and, thanks to his stubbornness, courage and perseverance, he manages to slowly untangle the yarn and shed light on the problems of the Earth and on possible solutions to free this world from the greyness that grips it." (Anna Vannucchi)

Alessandro Niccoli was born in San Miniato on January 2, 1968. His interest in the commons prompted him to become a lawyer. He led political opposition in his city, to preserve the environment from overbuilding projects, from the spread of herbicides and poisons from local industry.

In 2013 he participated in a literary competition with the short story: "Walking, your spirit dreamed", published in the book Tales of the Via Francigena, ed. Del Bucchia. In 2019 it was released in bookstores with “L'odore delle Rose” published by Europa Edizioni.

What listeners say about Nafis and the Colourful Hallways