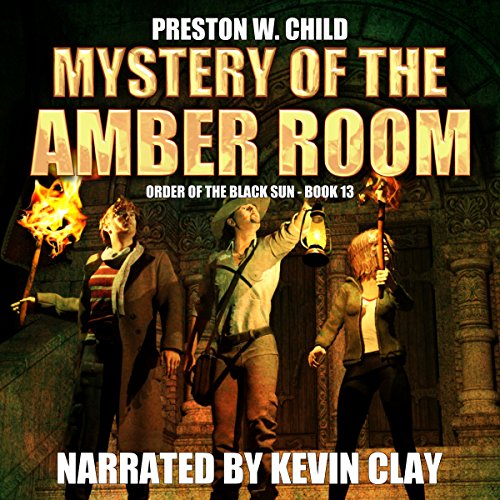 Mystery of the Amber Room

A strange and terrifying ability surfaces in investigative journalist Sam Cleave, leaving his associate, Dr. Nina Gould, worried for his health. But Sam is not the one she should be worried about. Nina discovers Sam's psychic talent is not meant to help others - quite the opposite.

Somewhere, Sam has contracted a parasite that attacks the brain, facilitating heightened powers of hypnotic suggestion through increased electrical activity in the neurons. In other words: mind control.

When their mutual friend, David Purdue, is kidnapped and tortured by an evil Nazi by the name of Klaus Kemper, a distant connection to Sam's malady comes into play. Kemper knows Sam's psychic powers are the work of an ancient organism that happens to be caught within the amber resin used in the legendary lost art masterpiece, the Amber Room, and he wants the power it holds to brainwash the world into submission.

Purdue, Sam, and Nina embark on a quest to find the Amber Room, reputed to have been destroyed during WWII. They have 48 hours to deliver it to Kemper or else the Order of the Black Sun will execute the German chancellor and subjugate the countries of the European Union.

But the last lost pieces of the Amber Room are hidden by a clandestine Red Army unit under one of the most inaccessible and hazardous locations in the world: the Chernobyl Power Plant.

What listeners say about Mystery of the Amber Room

A series review, rather than individual ones.

The Order of the Black Sun series, basically, harkens back to the old pulp novels of investigators/scientists vs horrifying cults/evil baddies/Nazis, with a bit of a modern twist. They are generally fun reads, a little light on scientific accuracy in places, featuring a trio of protagonists who hail from Edinburgh: a modern historian, a Pulitzer winning reporter and a millionaire/billionaire (the books can't quite keep it straight which is the case) tech inventor.

Any Brit listening to these is going to be constantly on edge waiting for the horrendous mispronunciations and accents. Some examples:

The narrator of the first two stories kept on referring to MI6 as M16.

The accents of the three protagonists jump about, at first I thought the reporter was meant to be Irish but when their abode was confirmed I realised he was meant to be Scots, but its strength comes and goes across the series; the other two protagonists have zero Scots accents, the historian can kind of be explained as she spent time in other universities, but the inventor often ends up sounding like a brash American businessman.

Place names, oh god, after 13 books I think I've only heard Edinburgh correctly pronounced once, but I suspect it was an accident on the part of the narrator; mostly it's a mix of Edinborough, Edinbruh (yes, the "r" before the "u"), and Edinburg (hard "g"). Then there's the one book that's predominantly set in Lyon, except, for the first two thirds of the book, where the narrator calls it Lion, even when being pronounced by a French taxi driver; I can only presume someone with a bit of knowledge walked in and asked why they kept talking about lions...

Despite all this, however, they are fun and should be enjoyed in a light-hearted manner.

I have enjoyed this entire series. I love the characters and the narrator too! Can wait to read the next one!