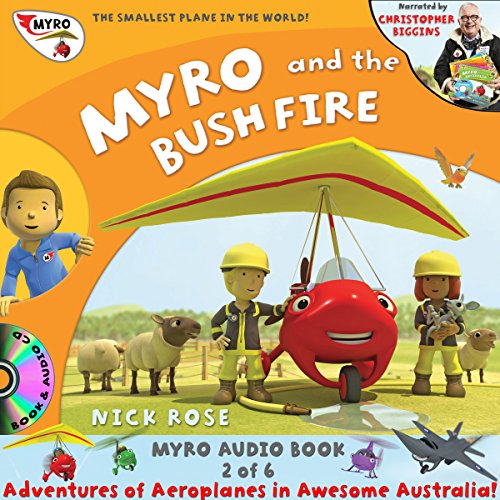 Myro and the Bush Fire

Myro the Microlight is the Smallest Plane in the World!

Christopher Biggins narrates the second in the series of six audio books about Myro's adventures "Down Under" in awesome Australia.

Just when Myro thought Australia couldn't get any hotter, a rip-roaring bushfire flares up. It's a good thing the Smallest Plane in the World can think as fast as he can fly!

But will he radio "Mayday! Mayday!" in time? Can humongous Hana the Hercules put the fire out before his friends are singed like sausages on a barbie?

Join Myro as he ducks and dives through smoke and flames to save the day!

Myro, the Smallest Plane in the World, is settling in to his new home in Australia, but it's a day hotter than anything he's known before. His pilot and the farmer are fishing at the cool billabong when Myro hears the frantic stampede of animals from the bush... a fire is raging, and it's coming closer!

Two ultralight aeroplanes are trapped in their hangar and Myro can't get any response to his MAYDAY call. His only choice is to fly without his pilot until he gets a signal.

The brave little plane takes off through the thick black smoke to call the control tower, and an emergency team is scrambled to the rescue.

Myro might have broken the rules to fly alone, but now he's a hero.

What listeners say about Myro and the Bush Fire