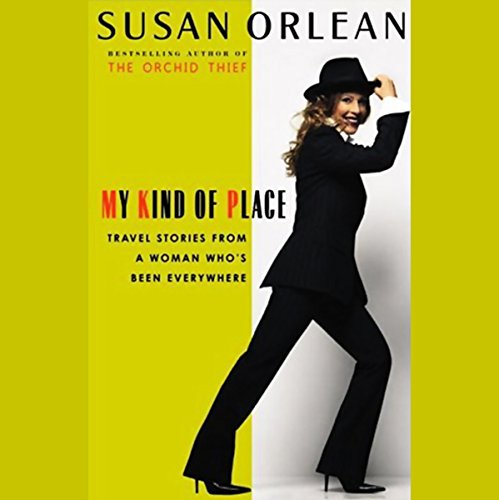 My Kind of Place

Travel Stories from a Woman Who's Been Everywhere
By: Susan Orlean
Narrated by: Susan Orlean
Length: 4 hrs and 50 mins
Categories: Travel & Adventure, Adventures & Exploration
3 out of 5 stars 3.0 (1 rating)

My Kind of Place

My Kind of Place takes listeners on a series of remarkable journeys in a uniquely witty and sophisticated travel audiobook. In this irresistible collectino of adventures far and near, Susan Orlean coducts a tour of the world via its subcultures, from the heart of the African music scene in Paris to the World Taxidermy Championships in Springfield, Illinois, and even into her own apartment, where she imagines a very famous houseguest taking advantage of her hospitality.

With Orlean as guide, lucky listeners partake in all manner of armchair activity. They will trawl Icelandic waters with Keiko, everyone's favorite whale, as he tries to make it on his own; stay awhile in Midland, Texas, hometown of George W. Bush, a place where oil time is the only time that matters; and stalk caged tigers in Jackson, New Jersey, a suburban town with one of the highest concentrations anywhere in the world of tigers per square mile.

Vivid, humorous, unconventional, and incomparably entertaining, Susan Orlean's writings for The New Yorker have delighted readers for more than a decade. My Kind of Place is an inimitable treat by one of America's premier literary journalists.

Wonderful listening, but the music!

I almost gave up a few minutes into the book. Sometimes producers stick music on, and usually it's okay. But the opening of this book is played under some African guitar, and it sounds as if the author is struggling to be heard. And it went on, deep into the narrative, and at the end, it came back, spoiling the ending for me.

That said, the writing is wonderful, the piece on the tigers and the travels to Bhutan are real high points and the afterward is touching in the extreme (until you can't hear her over the music). Recommended, but with a plea to audiobook producers to remember that the words are the most important things, and not to drown them out.

These stories seemed more of the human interest type than "travel writing." However, they were very interesting and entertaining. The wide variety of topics, from a tiger lady in NJ to fertility trekkers in Bhutan, were well narrated. Orlean was sure to give educating background and context to each of her stories, while also putting a human face to the issues. Well worth listening to!

Orlean's enthusiasm is infectious, her delivery engaging, and her writing smart, warm, and funny. Nice short pieces that are perfect for short drives.

Loved this book. I'd love to read more from her. I just couldn't stand the music it kept playing after she started speaking.