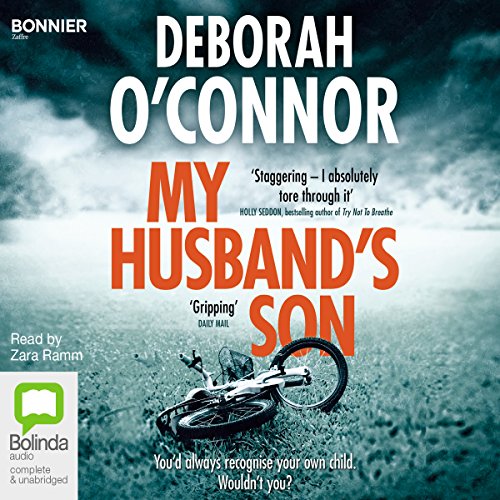 By: Deborah O'Connor
Narrated by: Zara Ramm
Try for £0.00

You would always recognise your own child...wouldn't you? Heidi and Jason aren't like other couples. Six years ago, Heidi's daughter was murdered. A year later, Jason's son Barney disappeared. Their shared loss brought them together. By chance, Heidi meets a boy she's certain is her husband's long-missing son - but Jason is equally convinced it's not him. Is Heidi mad? Or is Jason hiding something? And can their fragile marriage survive Heidi's search for the truth?

What listeners say about My Husband's Son

What disappointed you about My Husband's Son?

I wanted to bin this about a third of the way through but persevered in the hope it would improve. The decision making of Heidi (the main character) was not only improbable but astoundingly stupid. Going out at midnight knowingly to climb up bins in an alley to try and get pictures through a skylight she puts on towering high heels and a skirt. Why? She is supposed to be constantly pondering the situation but makes wild ill thought out decisions. I found myself getting thoroughly annoyed with the whole book

Would you ever listen to anything by Deborah O'Connor again?

I don't think so. It's as though the author has an idea about the end of the story and builds the format that reaches that outcome no matter how wild and improbable the storyline in order to get there. It's ill thought out and completely unconvincing in detail.

Would you be willing to try another one of Zara Ramm’s performances?

If you could play editor, what scene or scenes would you have cut from My Husband's Son?

All of the middle section of the book. Heidi goes through all of these ridiculous little scenarios in an effort to get evidence that the child in the story is her husband's missing son. Even though the place she needs to access is up for for lease, all she had to do was make an appointment to view the building and take photos whilst she is viewing. Job done story almost over.