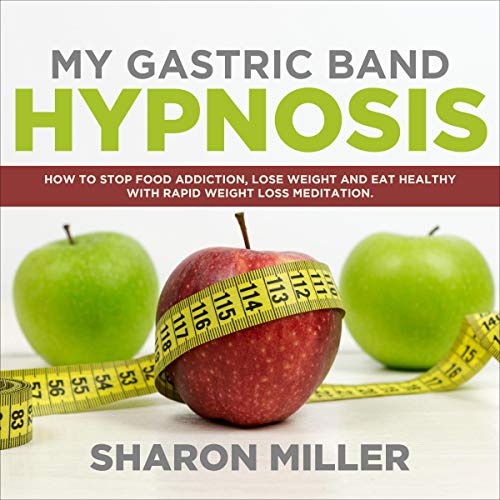 By: Sharon Miller
Narrated by: Nikki Delgado
Try for £0.00

A hypnotic gastric band is an ideal booster for you if:

The hypnotic gastric band permits you to reset the neuro-physiological feedback system. By restricting the portion of food you can eat, you re-sensitize the stomach, and it signals "fullness" to you rapidly.

The gastric band (also called a lap band) has become an ever more popular treatment for those who want to lose weight over the last decade. A band is installed around the stomach and inflated to greatly reduce the ability of the stomach. This means that the patient eats less food, which results in a quick and lasting loss of weight.

Nevertheless, gastric band surgery is not risk-free. There is always the inherent risk of anything going wrong, but the lap band can also cause certain problems specifically. This includes a slipping band (which can result in too much or not enough stomach capacity), acid reflux, nausea, disease, diarrhea, regeneration, blockage, and other problems. There are still hidden dangers, although the findings are certainly impressive.

But would it not be awesome if the performance of the gastric band could be repeated without any risk?

This is why this book is a must-listen for anyone looking to permanently lose weight. Enjoy!

What listeners say about My Gastric Band Hypnosis

Confused by all the 5 star reviews....

I cannot understand the number of 5 star reviews for this book (all submitted over a very short period of time). The audio sounds almost automated or generated in some way. Some of the sentences make no sense in terms of structure or language. Perhaps it has been processed through an automatic translator, but some of it is quite bizarre. I cannot really comment on the content - I'm afraid I could not listen to it to the end, as I found the audio too distracting. Unfortunately it was a requirement to also read the hefty accompanying PDF, which kind of defeated the point of the audio book. I'll be requesting a refund.

The narrator is the reason I couldn't finish this book. She speaks with a bored, uninterested tone which I find really off-putting. Like a dead newsreader. Sorry but just not good!

This is a great inspirational audio book.

This book I like because Meditation can not only help you lose weight but also to manage the mental challenges that come with stressing over losing weight.

There are lots of positive contemplation to assist you alter your attitude about eating and staying on with your weight loss objectives.

This audio-book is a comprehensive explanation!!!

This book provides a lot of helpful information on Gastric Band Hypnosis. This book additionally is a proper perused and has incredible tips and deceives! It helped me drop pounds quick! Grabbed this for my wife and she happy this this book.

I have listen this book. The authors very well presented the book in front of us. The book fascinated me every topics. I am very much interested in listening his spoken books. I would like to recommend this book to everyone.

This audio book has been so lovely and helpful

It held very important content. This is a great book to start the Gastric Band Hypnosis. If you want to lose weight quickly without changing your eating habits, then listen this book. I would recommend this book to anyone.

I found an Amazing audiobook for me

Excellent content for everyone's Gastric Band Hypnosis additional supplements and diet or exercise program you are experiencing. Other than invading positive consideration in your mind, you are additional .

This audiobook is helpful information

This audiobook provides a lot of helpful information on Rapid Weight Loss. This book additionally is a proper perused and has incredible tips and deceives! It helped me drop pounds quick!

I think this book is the best book of the topic.

This was an excellent and informative

In this book provide very good guideline about Gastric Band Hypnosis. I am exceptionally inspire with this book, since i know so numerous modern things from this book.I will recommend this book.

So great and filled with useful information!

This book was a short simple listen. I don't know whether you can be entranced by perusing. This book is extremely intriguing and very elegantly composed. I'm happy to have it part of my perpetual library.