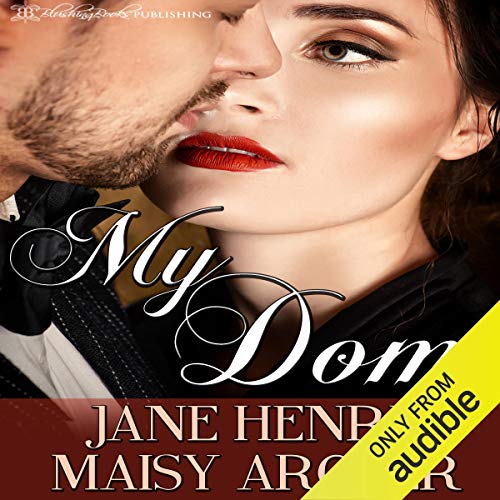 By: Jane Henry,Maisy Archer
Narrated by: Nova Quinn
Try for £0.00

Heidi considers herself a strong, independent, professional - definitely not the type to fall for a macho, dominant, alpha male like her neighbor in 6F. Yet when she overhears his kinky, sensual escapades one evening, she finds herself as intrigued as she is horrified. Surely that's not spanking she's hearing? And are those whimpers from the woman in his bed caused by pleasure or pain? She tells herself she is not attracted to...whatever they are doing. But when she has an unfortunate run-in with Mr. 6F himself, the connection is electric. To her great consternation, she finds herself imagining what it would be like to be under his authority, or bound to his bed.

But when Heidi and Dom are thrown together in an unlikely series of events that tie them together professionally, they must separate business from pleasure. Or will they?

What listeners say about My Dom

I don't know if the authors have done something to piss the folks at Blushing Books off. clearly there's some bad blood.
The stories in this series are good, better than many in the genre. Formulaic, HEA books with hot scenes, but also providing reasonable character depth and a good mix of drama, humor and pathos.
But, while these books make a decent read, the narration in the audiobook is an absolute horror-show and makes enjoyment of them almost impossible. Painful. The only way I was able to get through them was to think of the reader a prompt for an actual narration going on in my head. And I did that much mainly out of a sense of support for the writers.
The reading is stiff, with bad, awkwardly timed inflection and elocution that makes it seem as if this is the first time the reader ('cause this *ain't* narration) of the audiobook has encountered the script. The narration in each of the books of the series is consistently bad.
This quality of the reading in this audiobook is a frank betrayal of the writers. It seems designed to garner bad reviews. Worse, however is that it is a giant "f**k you" tp the listener. Bad production values on the level of those in this audiobook show absolute disdain for the listener. Which is curious in a business where the listener or read holds the power over success.
So, the only thing I am left with is that the writers pissed Blushing Books off somehow, because these tracks feel like vengence.

I loved the authors development of the relationship and the smart dialogue and interesting storyline. I'm excited it's a series and can't wait to listen to the next story. The narrator did an excellent job.

Completely intoxicate me, I am sitting at work with earbuds in, and this book has my attention! Jane Henry and Maisy Archer have a winning series started with the Boston Doms! Heidi hears her neighbor spanking his date through the window and is totally intrigued by what she hears. Few a chance encounter with her dog and an injury at the local gym, Dom(what an appropriate name) and Heidi become friends, and slowly become involved. This book had me captivated, had me taking the journey into bdsm right along with Heidi and falling in love with Dom. I also love meeting the supporting cast of characters(Matteo, Slay, Hillary and of course, Heidi's over the top mom). The integration of the lifestyle and the social issues and tragedy which are encountered by Hillary make this story suspenseful and sexy all at the same time.

Nova Quinn does an excellent job narrating this book from Heidi's POV. I think she has a good range for both male and female voices and I found her performance to be wonderful.

What a great, sexy story. I couldn't turn it off! the narrator was fantastic and the story was hit!!

must be a first book for this author

There are chapters that are at different speeds so i started listening on my desktop and had to switch to my iphone to change the speed at different chapters. Also there are sections that are dubbed over where there are two different conversations going on over each other.

The narrator was not good at changing her voice to sounds different from male to female characters so it was confusing sometimes to know which character was speaking.

I did, however, love the Dom's way of taking care of Heidi and that she had a reputation of a ball buster and not a pushover.

Over all i was able to finish the book and think it was good over all.

The narration went from sounding like it was being recorded in an office to a bathroom. To get through it I sped up the speed. I wish they would have either chosen a different narrator or done quality control. If I would have paid or used a credit on this title I would be asking for a refund.

Production company should be shot

I am trying to not let the extremely poor quality of the audio taint my opinion of the book or the narrator Both should sue the production company/publisher for the quality of the recording.

I hope the author finds a different publisher and I hope the Narrator never works for this production company.

great brain candy! light enough that you can listen any time and hot enough to make you blush.

🌻Meh, it was an OK Escape Package listen ☹️

I want to start by stating that, if this wasn’t in the Escape Package, I wouldn’t have used a credit to acquire it. Why? It’s too short and I’m not spending a precious credit on any book that isn’t 8 or more hours; it’s not a good return on my investment of A credit.

The story was rushed and ended abruptly. It didn’t feel complete. There were some goods parts but , there were more, not so good parts. It’s definitely just a mediocre start to this series!

The actual book was pretty good but the narration had me wishing it was over quicker. There were times where same sentences were repeated, in the beginning there was a spot where the whole book started over while the current narration was going. Overall, I was majorly disappointed with the narration but I like where the story was going so I’ll be listening to the second book and praying for a redemption.