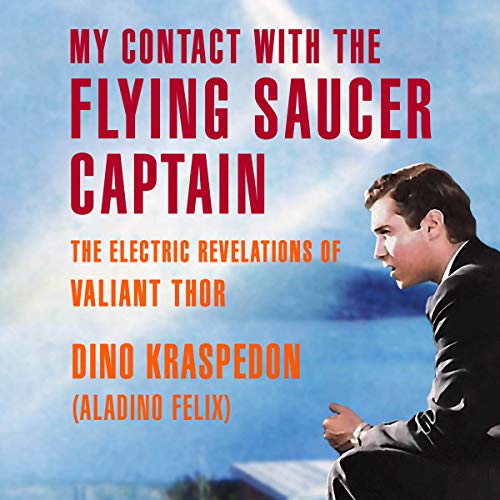 New Saucerian presents a classic from the Saucerian Press catalog, My Contact With The Flying Saucer Captain: The Electric Revelations of Valiant Thor, in which Dino Kraspedon engages in lengthy scientific discussions with a man from outer space, who, according to Saucerian editor Gray Barker, actually was Valiant Thor, the "Stranger at the Pentagon".

This shocking revelation has breathed new life into a book that was a best seller in Brazil when it first came out in 1959. The book, which was suppressed for decades by the FBI (because the author was thought to be a terrorist), recounts in detail how flying saucers actually work and are powered, and how they overcome the forces of gravity.

This book details procedures and technologies still in use today in the aerospace industry, perhaps because many of them are the product of Valiant Thor's student, Nikola Tesla - another revelation that recently came to light. As students of Tesla know, he claimed to have communicated with Venusians many times, which undoubtedly would have included Thor - Earth ambassador and all-around genius.

What listeners say about My Contact with the Flying Saucer Captain

I had a Great time listening to this Audiobook, loved that it had music themes running in the background... 5 Stars

Liked it but not enough about Captains people

Very technical at times. i liked focus on spiritual. Wanted more info on the Captain.