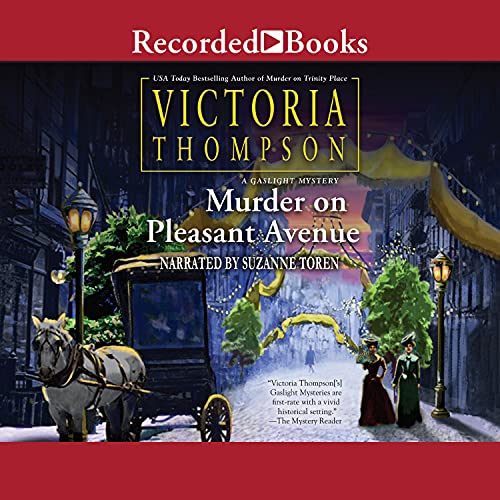 By: Victoria Thompson
Narrated by: Suzanne Toren
Try for £0.00

When Gino Donatelli is accused of a brutal murder, beloved sleuths Sarah and Frank Malloy have to catch a killer who is out to destroy their innocent friend's life in the latest installment of the national best-selling Gaslight mysteries.

A victim is found, brutally murdered and the police are certain they've caught the killer. Their only suspect: Gino Donatelli.

Frank and Sarah know Gino is innocent, but the police have a one-track mind. Once Frank struck it rich and left their ranks taking Gino with him, there has been a simmering resentment in the department. And now, someone has pulled out all the stops to make it look like Gino is the only one who could have committed the crime.

With the clock ticking and evidence mounting against their friend, Sarah and Frank will try to unravel a treacherous plot before Gino is sent up the river for good.

What listeners say about Murder on Pleasant Avenue

another great book in the gaslight murder series. This series gets better with each new installment, the characters come to life as you submerge yourself in their world.

This is a wonderful series best read in order. This way you can really understand the relationships between the characters as they evolve. This time Gino is suspected of murder.

I've listened to most of these on Audible and love listening to this series. I especially enjoy learning about the history of New York during the turn of the 20th century. Hope there is another book soon.

One of the best of the Gaslight Series. I love the exchanges between Gino and Maeve.

This was a great read! The narration is some of the best I've heard ever and the story was pretty awesome. there are no complaints over here.

i really like Victoria Thompson’s gaslight mystery eversince I first read Murder at the Bowery. I love that the details of the book were well researched by the author. i am happy that Gino and Mauve story has progressed. The book made me think really hard who the real culprit was. i also enjoy how Susan Toren put live to each of the characters. Cant want for the next book to come out.

The narrator has your fun attention. Love this author and the characters she brings to life. They are like my family

I just love learning about old NYC. I grew up there ànd a lot of the time the history, from the Dutch to modern times just went in one ear and out the other.

I love everything about Victoria Thompson's Gaslight Mystery series, from the growing cast of characters to the Victorian New York setting to the murder mystery. Oh yes, and the interesting author note at the end that gives a little more background about a specific historical event and/or people in the book. In MURDER ON PLEASANT AVENUE, Gino is accused of murder and Frank & Sarah Malloy set out to prove their friend is innocent. I thoroughly enjoyed the writing and the narration!

I love this series. It is engaging without being gory or vulgar. The characters are just average and that makes them so likeable - even the bad guys! This one has a new twist with Gino's family and a surprise ending!