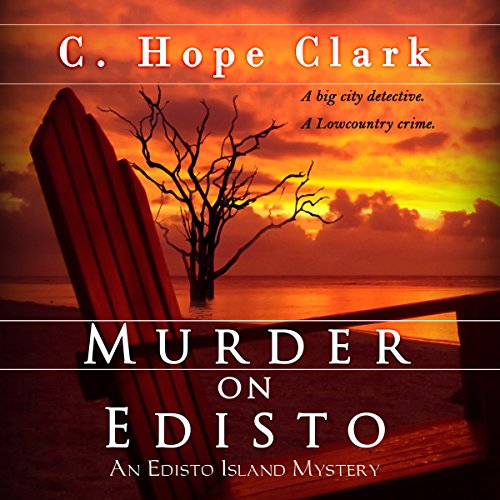 Peace, safety, a place to grieve and heal. After her husband is murdered by the Russian mob, Boston detective Callie Jean Morgan comes home to her family's cottage in South Carolina. There, she can keep their teenage son, Jeb, away from further threats.

But the day they arrive in Edisto Beach, Callie finds her childhood mentor and elderly neighbor murdered. Taunted by the killer, who repeatedly violates her home and threatens others in the community, Callie finds her new sanctuary has become her old nightmare. Despite warnings from the town's handsome police chief, Callie plunges back into detective work, pursuing a sinister stranger who may have ties to her past. He's turning a quiet paradise into a paranoid patch of sand where nobody's safe. She'll do whatever it takes to stop him.

Would you listen to Murder on Edisto again? Why?

Murder at Edisto by C. Hope Clark is the first of Ms. Clark’s books that I’ve had the pleasure of listening to (I had the audiobook). It’s a fast paced thriller mystery that will keep you intrigued.
Callie Morgan is a tough ex-Boston Detective who has been thrown off her game. Forced to accept the murder of her husband, she takes a reprieve to Edisto Beach, hoping to regain her footing with her only son. But trouble only follows her and she finds herself in the middle of a murder investigation and multiple robberies. Worse, she’s being looked at as a suspect. Callie finds the inner resolve to fight back and use the training she’s been given to find the killer and stop the robberies but it might cost her the life of her son and herself.
My favorite character in this story is the crazy gypsy neighbor, Ms. Bianche. She’s the complete opposite of Callie and someone to keep her life lighter, when possible. She had me laughing at her antics.
I found the story to be extremely well done and enjoyed it very much and would highly recommend it. I received the audiobook of Murder at Edisto from the author and have provided my honest opinion in this review.

Have you listened to any of Pamela Almand’s other performances before? How does this one compare?

No this was the first. She does a great job of narration

thank you for the opportunity to review it

This got my heart racing

Would you consider the audio edition of Murder on Edisto to be better than the print version?

I have not read the print version yet, but after this I will be buying the whole series!

I loved the emotions the reader poured into each character. The way that she read got my heart racing in the exciting scenes, and breaking in the sad.

My favorite scene was when Callie beat up Paulie in her front yard.

The whole time Stan was with her. By the writing and reading you could tell there was so much love and history behind both characters. They knew that they loved each other but had never acted on their feelings because of the job. They had just enough of each other before being snapped back to reality.

This is the first audio book I have listened to. I came to it with slight hesitation but all I can is wow! The reader captures all the emotion and passion that the writer poured into the book. This was a very enjoyable experience, and I look forward to my next audio book.

Great characters and a roller-coaster plot

What did you love best about Murder on Edisto?

C Hope Clark has given us a fabulous, edge-of-your-seat ride in this lush, salt-tanged South Carolina beach novel. Callie Jean Morgan returns, somewhat reluctantly, to the beach home of her youth after she had moved far away to carve out a career for herself and a life that wasn’t ordained by her strong-willed mother. She was a top rate detective in Boston with a husband and son she loved fiercely when her life fell apart in one horrific night. Still adrift in grief and unable to pull her life together again, she accepts the gift of the home on Edisto from her parents hoping this new start is what she and her son Jeb need. But fear, suspicion and guilt continue to dog her along with an unknown killer intent on driving her over the edge. Edisto is filled with colorful characters starting with Callie’s quirky, perky neighbor who arrives to sage her home and rid it of bad karma and the handyman who lives out of his car. There’s a wealthy Canadian intent on wooing Callie and a bullying deputy who does everything to intimidate her. And then there’s the hunky local police chief with a mysterious background of his own.

Callie wants to be normal again and protect her son from any more mayhem, but someone is determined that isn’t going to happen. On her very first day in her new home Callie is driven to tearing down the beach in a panic trying to find her son with her Glock in her hand, gaining herself a reputation it’s going to be hard to fix. But the mayhem is just getting started. The twists and turns in this story will keep you glued to your seat until the final page. And when you finally do turn that last page, you’re going to hurry back to buy Edisto Jinx and dive into the next chapter of Callie’s life.

What other book might you compare Murder on Edisto to and why?

C Hope Clark's Carolina Slade series - because her characters are so well drawn with depth and color.

Which character – as performed by Pamela Almand – was your favorite?

My favorite character in the story was the local police chief with his own troubled past, but Pamela Almand's presentation of Callie's quirky next door neighbor with her hippy, yoga, sage burning was spot on. Close your eyes and the woman came to life as you listened.

I only wish I'd had that many hours in a row to do so. I did spend time sitting in my car after returning home, unable to turn the car off because I was so thoroughly sucked into the story.

This was a good book with a great setting and char

Would you consider the audio edition of Murder on Edisto to be better than the print version?

Yes. The voices of each character gives it life tat you don't get in a book. Narrator's voice makes each person identifiable and individual and gives more personality to each one.

Setting. I have been there and like to hear about familiar places.

Which character – as performed by Pamela Almand – was your favorite?

Hard to choose because I thought they were all really done well. I loved her slightly Southern drawl and could just hear my relatives from the South in each of them. But I liked Callie's parents voices and definitely the loopy neighbor

I got this download free in return for an honest review, and I really liked both the story written by C. Hope Clark and the audiobook as narrated by Pamela Almand

The narrator was great! She was able to convey many characters and give them personality. It felt realistic and as if I were there with the characters. A good read and highly recommended

Absolutely LOVED it! Ready for the next one!

90% of what I read is non fiction, occasionally I pick up something different. So glad I did! Looking forward to the next book in the series.

didn't like language but story was good. love that Sea Cow made the mention!

Would you listen to Murder on Edisto again? Why?

Yes. I liked the characters and liked the storyline. It had good action and a compelling who-dun-it right up to the end. The variety of characters was great and the voices really made it come alive for me.

I really liked the whole thing. The voices were distinct and you could always tell who was talking. The humorous characters were given quirky interesting voices and (spoiler alert) you could really hear the transition in one voice as the story unwound.

When she's running around the beach in a panic attack, you could feel it rising

Former female detective has many personal and real problems to solve. She is strong, but vulnerable and weakened by life's situations. I was able to complete many chores due to not wanting to stop listening to this story. I look forward to reading more by this author.

Hope Clark knows how to keep her readers captivated until the very end. Throughout this book, the heroine is kept wondering who killed her good friend who lived next door to her. She had already lost her husband when her house burned down, but she found that he was already dead when the murderer started the fire. She knew she was supposed to be the one to die that day. She had captured a Russian mobster and now she was paying for it. She worried about her 18 year old son, Jeb. Having been a past marshall, she couldn't help but want to jump in and solve the case, but she was still grieving and she knew her mental state was not the best. I recommend this book to anyone who enjoys mysteries. Hope Clark is a terrific writer and her books are terrific reads.