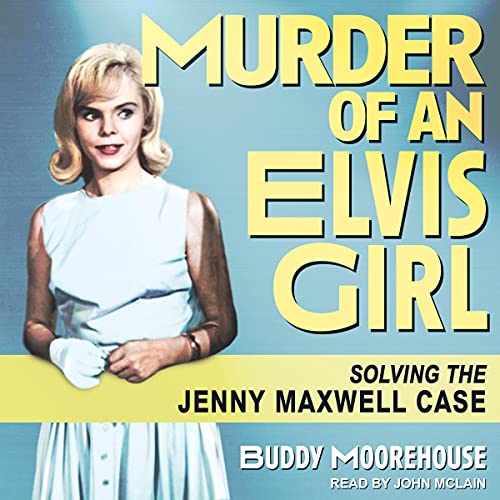 Murder of an Elvis Girl

By: Buddy Moorehouse
Narrated by: John McLain
Try for £0.00

It's one of the most brutal unsolved murders in the Elvis Presley universe - the 1981 slaying of his beautiful Blue Hawaii co-star, Jenny Maxwell. It was reported at the time that the murder was part of a botched robbery in Beverly Hills, but that's not at all what happened. Forty years after the murder, thanks to this book, it's finally been solved. For the first time, the truth is revealed in Murder of an Elvis Girl: Solving the Jenny Maxwell Case. And the truth is incredible.

Jenny Maxwell was one of the hottest young actresses in Hollywood in the early 1960s, and she became best known as an Elvis Girl, playing the bratty Ellie Corbett in Elvis Presley's classic 1961 film, Blue Hawaii. The performance made her one of the most memorable Elvis Girls ever and endeared her to generations of the King's fans. She appeared in dozens of TV shows, as well-everything from Bonanza and My Three Sons to Father Knows Best and The Twilight Zone. In the 1960s, Jenny Maxwell's career was red-hot.

Murder of an Elvis Girl tells the amazing Hollywood life story of a true Elvis legend. Jenny Maxwell shared the screen with the likes of Jimmy Stewart, Robert Conrad, Joey Bishop, Bob Hope, and Joan Crawford. She rubbed elbows with Frank Sinatra and Sandra Dee. And biggest of all, she was an Elvis Girl.

What listeners say about Murder of an Elvis Girl