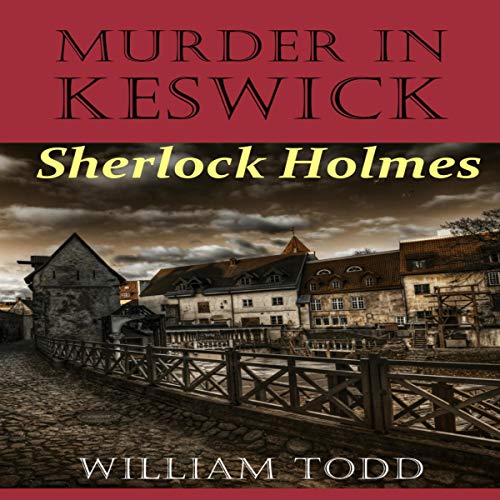 By: William Todd
Narrated by: Ben Werling
Try for £0.00

While on a well-deserved holiday in the Lake District to get away from the toils and troubles of London, Holmes and Watson find no respite. As soon as they exit the train, they hear news of a grisly murder making its way around the murmuring commuters. A local aristocrat, Mr. Darcy, has been found missing his head!

And that very night, the wealthy widow finds a stranger in her home who, upon seeing her, abandons his plans and quickly leaves. She believes the intruder to be the murderer of her husband who is now after a large sum of cash she keeps in the house safe.

Unsure if the would-be thief is the murderer or an opportunistic burglar, Holmes devises a plan to catch the burglar, all the while investigating the murder of Mr. Darcy. Follow Holmes, Watson, and the local constable Mr. Wickham as they untangle the mystery surrounding a Murder in Keswick.

What listeners say about Murder in Keswick: A Sherlock Holmes Mystery

A Slice of Sherlock Holmes!

Well William Todd certainly has managed to recreate the feel of a Sherlock Holmes story. This being an audiobook of only 2hrs 38mins it’s a step into Victorian England with Holmes arriving in Keswick for a restful stay with Dr Watson. On arriving a murder has been committed, a headless corpse gives his holiday a bonus. Ben Werling narrates as Dr Watson and does a fine job holding my attention with this slice of life in Victorian England with a Sherlock Holmes Mystery.

The story was very entertaining and the narration was done well. my only complaint is the choppy editing made parts sound off and robotic

Headless Corpse In A Quiet Town

When a headless body is found in a town that has little or no crime, Sherlock Holmes jumps at the chance to solve the murder. The police are sure that the culprit is a gypsy in town for the local horse fair. Of course the police are wrong, as always in a Holmes mystery. Todd has captured Doyle's voice perfectly. I was gifted this from Audiobookworm for my honest review.

If you are looking for pure Sherlock Holmes, you might be disappointed. But, if you enjoy these attempts to recreate a Holmes-type mystery, this is a pretty good one.

Watson insists that Holmes needs a vacation after weeks of grueling cases, so the pair travel to the small town of Keswick. Of course, even though this is a quiet little town with hardly any crime, the minute they arrive, the game is afoot when a decapitated body is found.

The author does a pretty decent job of imitating the Holmes style of investigation and the tale is told from the viewpoint of Watson. I was able to figure out the plot fairly early on in the book, but it was still an enjoyable read.

The narrator, Ben Werling, does a good job, with perfect pacing and accents for the characters. My only complaint about the sound quality is that there seems to be a lot of background sound effects that to me are rather distracting. I would prefer these books not to have these sound effects, but that is just my opinion.

I was given the chance to listen to this Audiobook through Jess the Audiobookworm and chose to review it.

Murder in Keswick. ..
A decent read /listen. Though as a Holmes fan I didn't find it to be Conan Doyle standard.
If you listen to this as just another murder mystery it is really quite good . And very easy to listen to. It holds your attention and has a really good storyline.
It is never an easy task to write a follow-up to a master writer. But this book is really entertaining. and a credible attempt. .
I received a free copy of this audio book at my own request and voluntarily leave this review.

I really enjoyed this story. It follows the path created for the original ones and does it really well. The case could perfectly fit in the casebook of Holmes :)

The plot is truly well done, and the end surprising. This is a valuable addition to any Holmes' fan library.

Ben Werling does a superb job with the narration

This was a good, classic Holmes & Watson tale. I think it would fit well into the original Doyle canon. I can just imagine H&W on vacation, with Holmes bored stiff until a headless body turns up. The glint of glee in his eyes must have shown to anyone interacting with him as he worked at the mystery.

Mrs. Darcy is no shrinking violet, which I liked. The ladies are still few in number and have limited roles, just as in the original stories (alas). I also liked Morwenna, who was no nonsense as well but in a different way from the American Mrs. Darcy. I think it was Morwenna that had my favorite line about finding dirty laundry under the bed, where her husband kicked it. She said something to the effect of her husband training her for child rearing by being lazy with his dirty clothes. Ha! I laughed out loud because it made me think of my man and how he leaves socks, plates, and empty drink containers here and there.

Initially, there are many suspects who had motive to take out Mr. Darcy. However, since we all know this is a Holmes mystery, it was very hard to ignore any little detail that might lead Holmes (and me as the reader) to the real killer. Still, the take did have a great twist near the end and I was little surprised by the final answer to the mystery. Kudos to the author for making it a little more intricate than expected.

Over all, the story has the feel and quality of the original H&W stories. I was entertained the entire time even if I was left wanting a bit more from the ladies. The story kept true to the Victorian setting. 4/5 stars.

The Narration: Ben Werling is great with Sherlock’s arrogant voice as well as being great with the indulgent, easy-going voice of Watson. His female voices need some work. While there were few ladies in this story, they sounded like men. I had to pay close attention to their scenes to keep track of who said what when. Werling does do a great job of capturing the subtle emotional changes of Sherlock as well the more explosive emotions of Watson. His pacing is perfect and there are no technical recording issues. 4/5 stars.

I received this audiobook as part of my participation in a blog tour with Audiobookworm Promotions. The tour is being sponsored by William Todd. The gifting of this audiobook did not affect my opinion of it.

I thought this was a fascinating story. I liked how it was set in a different Country. The world building was spot on, I never heard of Keswick, let alone been there, but I could see it beautifully. I admit I did figure out who dunit, but there was a nice twist at the end, which I love twists.
The narrator was ok, but sometimes he read a bit too fast for me, not sure why it was fast in some spots and not in others? And the noise and music in the background made it hard for me to hear the narrator sometimes. I know some people enjoy that kind of ambience tho. All in all, I found it rather enjoyable. It was a quick read too. I got this for free from http://audiobookwormpromotions.com/adopt-an-audiobook/ for an honest review.

I really enjoyed this short Sherlock Holmes murder mystery. The plot moved along at a good pace and the murderer isn't immediately obvious. The writing seemed well done and finished with a good conclusion to the plot. The narrator did a good job with the audio and production. I was given a copy of this audiobook for an unbiased review from Jesstheaudiobookworm.

Not everyone who wishes to add to the the Sherlock Homes pastiche can do so all that well but Mr. Todd pretty much nails it with Murder in Keswick. In fact, I think it might, in time, earn a place in the extracanonical body of work. Rather than the adventures of descendants of Holmes and Watson which have become so popular—and of which I’m very fond—this takes us back to the great detective himself and his companion.

The pair have set off for a vacation in the Lake District and Holmes is already bored without a worthy puzzle to solve so, when they step off the train in Keswick to hear talk about a headless body that’s been found, he can’t be happier. Who IS happier is the local constable, Mr. Wickham, who can’t believe he’ll be able to work with the famous detective.

Mr. Darcy, the victim, is naturally not happy without his head and the trio are soon hot on the trail of clues which, of course, only Holmes takes in but there are two women at the heart of the case, both very strongwilled and appealing. Could one of them be the killer? With a nifty twist near the end, all comes together…after Holmes shares his perspective, of course.

Ben Werling is a credible narrator who took me back to oldstyle Sherlock Holmes narrators, the best kind. He doesn’t differentiate voices all that well, especially females, but I actually don’t mind that. When I listen to a Sherlock Holmes story, I always hear Dr. Watson’s voice telling the story and I expect to hear him, not other characters. The only thing I didn’t care for in the production is the various background noises meant to enhance the settings; my hearing isn’t the greatest and I was distracted trying to figure out what I was hearing. I wouldn’t want them to be louder, just not there at all.

A Slice of Sherlock Holmes!

Well William Todd certainly has managed to recreate the feel of a Sherlock Holmes story. This being an audiobook of only 2hrs 38mins it’s a step into Victorian England with Holmes arriving in Keswick for a restful stay with Dr Watson. On arriving a murder has been committed, a headless corpse gives his holiday a bonus. Ben Werling narrates as Dr Watson and does a fine job holding my attention with this slice of life in Victorian England with a Sherlock Holmes Mystery.

I received this audiobook as part of my participation in a blog tour with Audiobookworm Promotions. The tour is being sponsored by William Todd. The gifting of this audiobook did not affect my opinion of it.