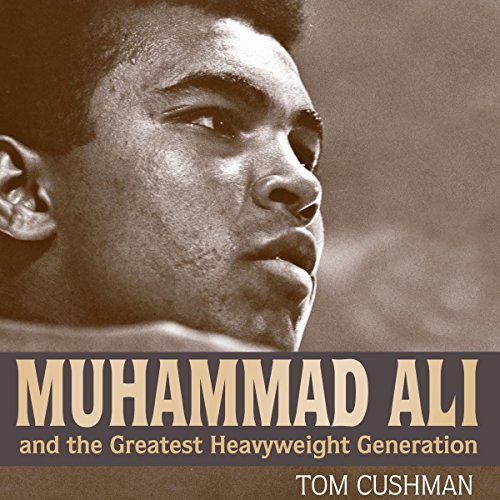 By: Tom Cushman
Narrated by: Todd Belcher
Try for £0.00

Tom Cushman, one of boxing's great sportswriters, followed the "Ali generation" of fighters from New York to Las Vegas, Nassau to Zaire, reporting for the Philadelphia Daily News from 1966 to 1982 and for the San Diego Tribune, 1982 to 1992. Muhammad Ali and the Greatest Heavyweight Generation chronicles the behind-the-scenes stories of the great athletes in boxing's biggest-and-best age, their victories and struggles, crimes and passions, heydays and swan songs.

This collection of essays, gleaned from Cushman's personal files as well as his recent research, brings to light the backgrounds of the fighters in and out of the ring: Liston's tragic death, Foreman's rise from hell to heaven, Holmes' crushing defeat and his great heart, Everett's murder, and everywhere, always, the unforgettable voice and charismatic volume of the astounding Muhammad Ali.

"This [is] history of the rarest sort the view of a man who not only had lived in the time and recorded the events, but now, a quarter of a century later, who was able to interpret both the athletic imprint left by these dynamic men and the sociological impact of their triumphs and tragedies."

The book is published by Southeast Missouri State University Press.

"Tom Cushman, the sportswriter who knew every square of the old square jungle. During the time I was in boxing and he was writing, he tried to help make boxing better." (George Foreman, two-time world heavyweight boxing champion)
"Tom Cushman is introspective and the best writer in any phase of sports that I have ever known. This book reflects just that." (Bob Knight, hall of fame basketball coach)
"Written by an outstanding sportswriter/columnist, this book...is a great read." (Jim Lampley, HBO boxing commentator)

What listeners say about Muhammad Ali and the Greatest Heavyweight Generation

A good insight into the lives that made boxing.

loved every bit of it . well worth it in every way possible. . .

Where does Muhammad Ali and the Greatest Heavyweight Generation rank among all the audiobooks you’ve listened to so far?

One of the most enjoyable.

What was one of the most memorable moments of Muhammad Ali and the Greatest Heavyweight Generation?

The writer's anecdotes of conversations with the boxers or those close to the boxers.

Did Todd Belcher do a good job differentiating each of the characters? How?

Belcher does a good job in differentiating between each of the characters in the clarity of his writing.

An authentic view of seventies boxing.

Tom Cushman, a long time sports pundit, becomes tour guide to the seventies boxing scene, discussing the lives and careers of the greats of that era: world champions, Ali, Frazier, Foreman, Norton and Holmes and other lesser, but accomplished, fighters such as Ernie Shavers, Jimmy Young and Gerry Cooney.

The listener is also given a look behind the boxing scenes. After a brief review of Frankie Carbo (formerly of Murder Incorporated) and Blinky Palermo in the fifties and sixties, Cushman moves forward to the seventies, critiquing Don King and his style of management, which is characterised by Ali’s second wife, Belinda: ‘Don King talks black, lives white and thinks green.’

This audiobook is much more than a series of potted biographies. Fast and pacey and written with an insightful – and, at times, lacerating – wit, it gives a real flavour of boxing in the seventies.