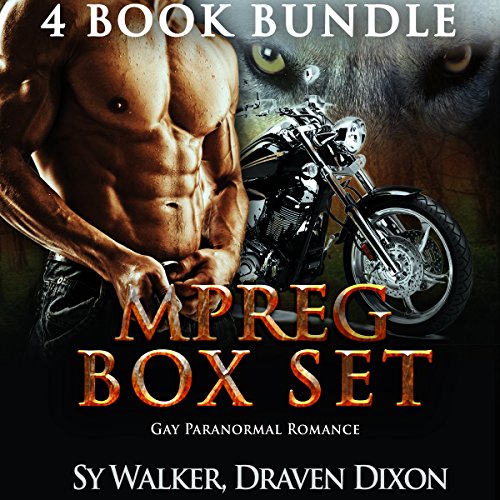 Lookout Omegas! A pack of sexy and fertile alpha-male shifters are headed your way!

These m/m novellas include bonus stories and a Spanish translation.

Bear's Baby
Arguably my favorite of the four, Bear's Baby has Charlie impregnated after a one night stand with alpha biker and werebear, Tommy. I liked that it's pretty realistic for a shifter impregnating a guy type story. It's got it all: action, passion, and a nice explanation behind the whole Mpreg.

Wolf Trail
Not a bad story, but I'll admit I was disappointed that Mpreg doesn't even happen until the epilogue.

Impregnated by the Wolf
Zebe has sex with Drew, even though it's forbidden, resulting in a pregnancy and danger when Zebe's MC tries to kill them both.

Secret of the Wolf
Arguably my least favorite, I wasn't a fan of how Sabre treats Mack, nor understood why Mack kept coming back for more, especially since none of it is explained through "mates" or some other such bonding. Also, again I was disappointed that Mpreg doesn't even happen until the epilogue, and then it contained my biggest Mpreg pet peeve...a** babies.


While the stories were a bit clichéd and nothing out of the ordinary, I was surprised by how much I enjoyed the narration for them. I have to admit David Ross did well enough that it kept me listening through some pretty heavy eye rolling. Ross does a good job distinguishing the voices for each story, so he's not just recycling the same character voices over and over, which was really nice. All four stories absolutely sound unique, which was a nice bonus.

Also, thankfully only one story has a** babies.

So if you're into Mpreg, love shifter stories, and are looking to get a bit more bang for your buck, this box set gives enough of sampling of different stories and characters, while not stinting on the enjoyable growly alphas. Check it out!

I received this book box set as an ARC for a honest review. I enjoyed all 4 stories, each book is a stand alone book with a HEA. Happy listening.

this was a good box set of books. they were well writen and narrated. the author did a wonderful job.

Pleasant For Only 1 Credit.

These stories were pleasant to listen to. Nothing astonishing, just pleasant. I would have like a little more of substance to them. I like Bears Baby the most. David Ross did a nice job with his narration. For 1 credit is not bad.

poorly thought out short stories.not worth the money. It’s a shame some of the story lines had great potential if they’d been executed properly they would have made for great stories

I do love paranormal romance💓 I'm glad this came in a box set, I wouldn't have bought the shorter books otherwise. I like long stories I could get lost in but enjoyed these books. I will be on the lookout for new box set deals.

These four stories were just plain nonsense with a heated hook-up or two included in each story.
The narrator did a very good job with the little he had to work.
This audiobook was given for free on behalf of the authors in exchange for an unbiased review.