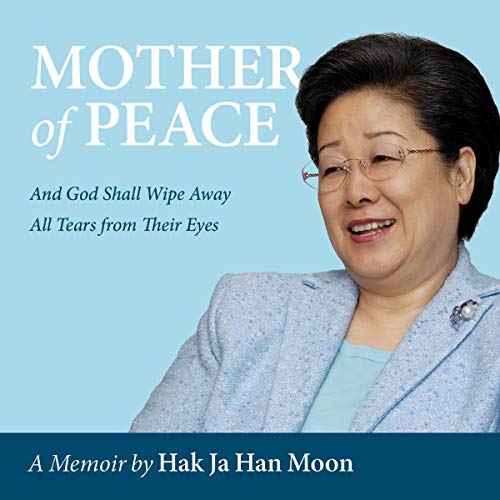 Discover the untold story of Hak Ja Han Moon, the North Korean village girl who is now known to millions as the Mother of Peace. Her heart-wrenching story reveals details of a war-torn childhood and trials of faith as she and her late husband, Rev. Sun Myung Moon, built a vast and still-growing international movement capable of fulfilling God's will for peace in the 21st century.

Dr. Moon's journey as a religious woman leader is breathtaking: Born in Japanese-occupied Korea in 1943, she spent her early life in nature so she could commune with God. War forced her to flee south with her mother and grandmother; they crossed the Han River Bridge minutes before it was blown up. Later, she walked and worked side-by-side with Father Moon, one of history's most energetic and visionary men.

During this time, she bore 14 children and buried four. She stood with her husband, Rev. Sun Myung Moon for hours as they officiated at Marriage Blessing Ceremonies for hundreds of thousands of couples. Together, they launched hundreds of organizations and businesses to serve youth, family and peacemaking.

"The Lord has always provided illumination in the darkest times, so we thank Him for inspiring this memoir, Mother of Peace." (Bishop Noel Jones, Senior Pastor, City of Refuge Church, Los Angeles, California)

"Mother Moon is bringing God's message to the world, and works to help marriages and families survive during these troubled times, bringing all nations and religions together to achieve world peace." (Hon. Dan Burton, US House of Representatives, (1983-2013)

What listeners say about Mother of Peace

This memoir shares the heart of a child war refugee taught the faith to put God first in her life and the trials, tribulations and glory that her life has wound through putting that ideal into reality of building a world of peace.
Well read by the narrator capturing the essence of the heart behind the words.