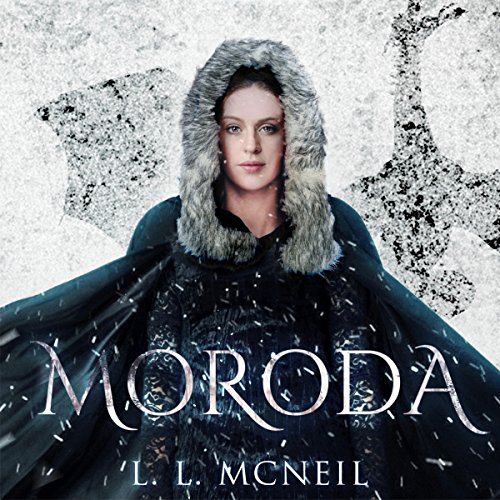 Linaria is a world where dragons are revered as gods, where airships rule the skies, and where war is stirring.

For Moroda, a former Goldstone, her life of luxury ends following her father's sudden death. When her city is destroyed by a dragon, she and her sister ally with a sky pirate and narrowly escape the carnage - only to find a vigilante from an exiled race has left a trail of destruction everywhere his growing army has traveled. With compulsion at his fingertips, he strengthens his hold over Linaria's people by stealing the power of dragons. It's only a matter of time before Moroda, too, is forced to submit.

With war nipping at her heels and danger lurking in her companions and adversaries, Moroda must quickly learn about herself, her world, and the dragons so intent on reducing it all to ash.

Moroda is the first novel in an epic six-book saga, a fast-paced, action-packed tale following a group of characters as war rages across their world. With pirates and soldiers, smiths and princes, Linaria is a vibrant land with a deeply unsettled past and an equally ominous future.

What listeners say about Moroda

DRAGONS!!!! What more do you need to make an epic story!? A thoroughly enjoyable listen, great plot twists that kept me interested and thankfully no love interests. Well done for writing such an amazing book, Georgie really brought the characters to life. Now I'm off to start listening to book 2 in the series.

A fascinating story in a reich diverse world. Well narrated with great, easily distinguishable character voices. I wonder if this isn’t the last we’ll hear from the world of Linaria.

Moroda is an engaging fantasy/sci-fi hybrid with airships, shape-changers and dragons – elements which feel partially inspired by (and an admiring nod to) the Final Fantasy series. It's a fun and dramatic adventure with a colourful array of unlikely travelling companions brought together by circumstance amid a looming war.

The vocal narrative is crisp and almost completely flawless, which, at just short of 13 hours of audio, is a quality accomplishment for narrator Georgie Leonard. Georgie's particular brand of dialect is one for which I have always had a bit of a soft spot; this, combined with her clear skill in recording and editing, makes it a pleasure to sit back and enjoy L.L. McNeil's first entry in the World Of Linaria series.

this book was ok but not very engaging , it was well written but not narrated with enthusiasm

The story is interesting but it was easier to read the book than lister to the book because I could not understand the narrator (Georgie Leonard). I usually can pick up an accent pretty well but this was so difficult for me to listen to, I had to really concentrate to understand her. Read the book instead if you have problems with accents, unless your British. I also find I can read faster than the narrator speaking.
The book Moroda by L.L. Mcneil is a dragon adventure, it's interesting but lacks description and action. The world is rather medieval which can be interesting but book fell flat for me.

This is the first book I have read/listened to by this author and I would jump at listening to another.
There is a conclusion to the main threat, but it is obvious that is but a battle in a greater war. I ended up looking to see if there actually was another book, and I’m pleased to see this is actually part of quite an extensive saga. The world built is interesting. I enjoyed the separate cultures and creatures, and I look forward to learning more about each one. There are dragons, shapeshifters, winged people, and even pirates in flying ships. Moroda and her sister were born into a privileged life, but when her father dies they loose everything. Her and her sister are quite naive when it comes to the rest of the races and people. Thankfully they have the fortitude to adapt and thrive in their new circumstances, but boy are there bumps along the way. Although Moroda is a key character, she is not the only focal point. ——-

This is the first book I have listened to by this narrator ( Georgie Leonard ) and I would definitely listen to another. She gives personality and distinction to each character. Her ability to perform a narration, rather than just read it, is remarkable. I love how she interprets Anara. I found her cadence fine. I sped up this listen to 1.4x, which is not unusual for me ( some I increase to 1.8-2x). ——-

There are no explicit sex scenes, or excessive gory violence, there is swearing with one character. ——-

This was an okay read

The story was very uneventful. Not much action to keep me interested so it took a while to get through this one.

I promised an honest review. Here goes: I honestly struggled to finish this book. Not the length of it that bothered be at all, in fact I love long books. The problem is the narrator. Which is very sad and disappointing, because I have to add that I truly like the narrator's different accents for the different characters. No, the problem for me personally, was the eternal pause that was placed between each sentence. I found that so frustrating. I wish I had this book in epub or mobi format as well, so I would be able to experience the story in a better light.

A lot of everything

A LOT of characters to keep track of, and plenty of Dragons, Magic, Shapeshifters, and Action. There is rather surprising ending for one of the story arcs, but several others seem left open, presumably for subsequent books?!?

My favorite thing about this book was the setting! Linaria was such a fun setting, with many different species, including of course, dragons! There was a lot of excitement happening, with mystery, friendships, and a giant quest. I appreciated the growth of the characters, and the challenges that they were faced when determining what was best for the greater good. Lots of great action scenes that keep you excited and wanting to listen further! I was given this audible listen in exchange for an honest review.