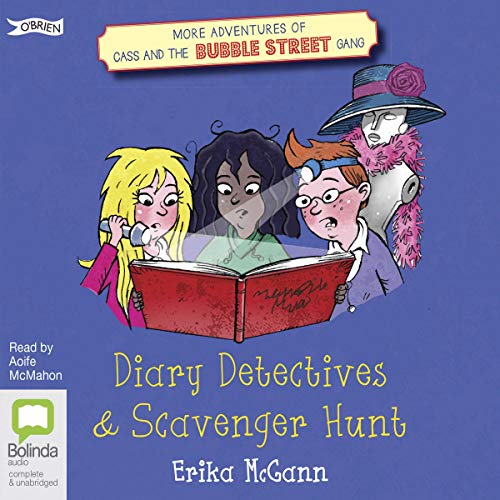 More Adventures of Cass and the Bubble Street Gang

Join the Bubble Street Gang as they investigate crimes, solve mysteries and have brilliant adventures!

Cass and her best friends, Lex and Nicholas, are the Bubble Street Gang! They investigate crimes, solve mysteries and have brilliant adventures. They’ve even got their own secret clubhouse!

Diary Detectives: Cass has a new mortal enemy. Ms Lee and her Residents’ Association are trying to make fun illegal in Berbel Street. The gang have to stop them, but they’ve also got a strange mystery to solve: Operation Catch the Wicked Writer.

Cass has found a really old diary full of wicked deeds - and it belongs to someone in Berbel Street. Which one of their neighbours is hiding a dark past? And how will the gang find them?

Scavenger Hunt: There’s a scavenger hunt! A real one - in the grounds of Mr McCall’s mansion - with clues to solve and other teams to beat. Cass is sure the Bubble Street Gang will win. But a sneaky someone has other ideas.

Meanwhile, a garden project in Shady Oaks Nursing Home turns shadier. Things are going missing, and Cass suspects there’s a thief on the loose. Is the gang clever enough to catch them?

"A bright-as-a-button main character, plenty of puzzles to solve and lots of humour make this book a real winner for young readers." (Irish Independent)

"Join Cass and the Bubble Street Gang for a brand new adventure in this thrilling series for young readers." (Primary Times)