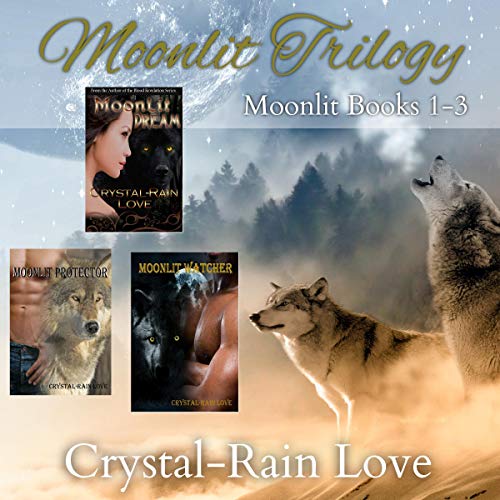 By: Crystal-Rain Love
Narrated by: Liona Gem
Try for £0.00

The first three novellas in the Moonlit Series Moonlit Dream Pack numbers are low. The reigning pack leader, Rong, has demanded all unmated Werewolves to breed each moon cycle.

Ming yearns for her destined mate, but Jason has been locked away in prison for ten years. Desperate to stay true to him and avoid the new breeding law, Ming begs the pack leader to spare her from the ruling. With a little magic, and a lot of faith, Jason is brought to Ming through a mystical realm.

Now the two destined mates must run from the pack, which is hot on their trail, while Jason struggles to come to terms with his past - something he must do in order to give Ming a moon vow. Ming's fate lies in the decision Jason needs to make with his heart and soul. Moonlit Watcher He watches her, until watching is no longer enough… Juliana Van Alder has fled the bright lights of New York, leaving the Broadway stage behind to discover the source of what's been drawing her to the North Carolina woods. What she discovers is unexpected danger, and a gorgeous, powerful man who just happens to be a wolf. She's found her soulmate, but there's one little problem...Derek Kingston is a wolf determined to protect her, and he can't be tamed.

Moonlit Protector Tyler left his pack for the quiet town of Stix, no longer able to live under the pack leader's rule. He just wanted somewhere to relax and not worry about anything. It worked out well until a storm blew trouble right into his lap. Kyra fled her abusive boyfriend, but when her borrowed vehicle runs out of gas in the worst town she could find herself in, she comes across Tyler.

Fate has brought the two together for a reason, but before they are able to join together as fate intended, they must survive the men Kyra's ex has sent after her with one specific mission: Capture Kyra...or kill her and the man protecting her.

I thoroughly enjoyed these 3 short stories. they blended well together and kept my interest. I was given this free audiobook at my request and have voluntarily left this review.

Two and a half great stories

I loved and the stories but I took offense to the last story and the racist tones. I loved having mixed couples but white did the one with the African American woman need to made as if she were the property of her ex! I received this book at my request and I am voluntarily leaving my honest review of my own free will.

just because a person is white doesn't mean they hate anyone else. I'm getting really sick on this type of story.

If I had to describe these books in one word it will be CAPTIVATING! The writer has accomplished what I have not seen yet with short and sweet story lines that keep your attention. Love it!