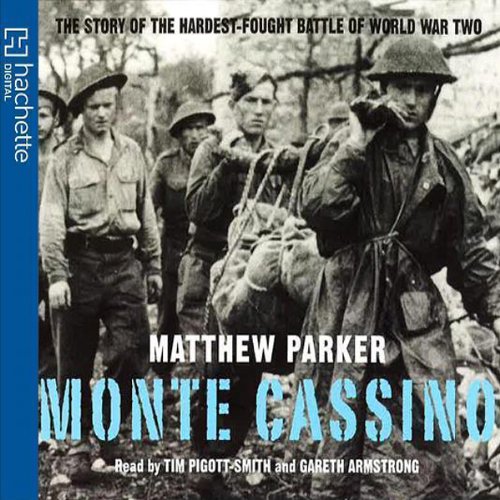 Monte Cassino: The Story of the Hardest-Fought Battle of World War Two

By: Matthew Parker
Narrated by: Tim Pigott-Smith,Gareth Armstrong
Try for £0.00

The Battle for Monte Cassino, which blocked the Allies' road to Rome in early 1944, was fought over terrible terrain and in appalling conditions, and saw human sacrifice and privation almost beyond imagination. Based on the first-hand accounts of veterans from around the world, Matthew Parker has recreated this epic battle from the experiences of the men who fought it.

What listeners say about Monte Cassino: The Story of the Hardest-Fought Battle of World War Two

A very good insight to a fruitless battle, with huge loss on both side. Great breaking in places at the senseless loss of lives.

A very good account of the battle but let down by too many factors. The book has been very abridged to the point where the flow gets lost and the story appears superficial. There are strange sound effects and sci fi type music which add nothing and are very off putting. The references to unit designations are hopelessly wrong such as the Sussex Batallion rather than the 1st Bn The Royal Sussex Regiment for example. Finally the excellent personal accounts are let down by awful fake accents performed by someone with a very strong accent themselves, thus making them all sound the same. Such a disappointment for what is actually a very good account. With hindsight I'd stick to the book.

too abridged and oddly produced...

I don't know how comprehensive the unabridged book was, but this felt like a very superficial treatment of the subject. The production was weird too - almost random music and sound effects passages which for me didn't sit with the overall content.

it was absolutely wonderful. never wanted it to end. I would highly recommend this is worth a listen.

A bit disappointed with this audiobook. I bought it as my late uncle was actually there. The music that was offputting as was the accents used for eyewitness accounts.