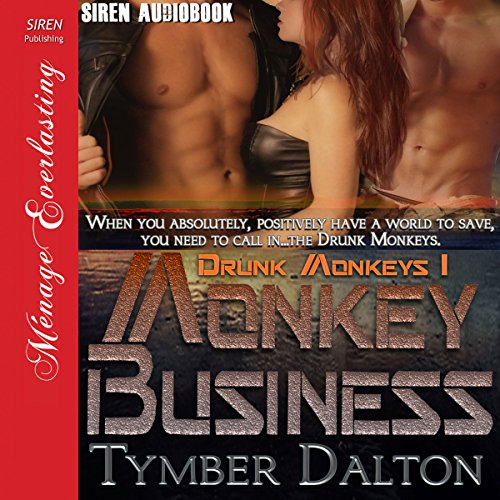 When you absolutely, positively have a world to save, you need to call in the Drunk Monkeys.

Celia Jorgens is a reporter from Chicago. Traveling to Australia, she's chasing the story of a lifetime, and a scientist she thinks might have answers to stop the deadly Kite virus that's ravaging the globe.

Tango and Doc are part of the Drunk Monkeys elite special ops unit. They've been given a mission, to bring in the scientist and use the reporter to find him. Unfortunately, it turns out shadow factions want them to fail, and the men no longer know who they can trust.

As passions flare between Celia and her two hunky military men, they all find themselves in a race to escape Australia before the borders close and their enemies find them. Now, it's up to Celia and the Drunk Monkeys to go off-the-grid and commit a little monkey business of their own before time runs out for the human race.

The books in this series are best listened to in order:

What listeners say about Monkey Business

Possible pandemic -who is going to find the cure or develop a vaccine? A great storyline with a little tension and intrigue in which our heroine searches for a scientist to work on the vaccine. And of course hot men and steamy sex!

Regrettably, Ms Lusk was not a good match for this story. Although I enjoyed her voice, her style is more suited to comedy or books with only female characters.

The woman heroine hasn't any common sense and she's whiny. Just a combination I can't stand. The narrator is excellent.

Long for no reason

This book could have been okay if not for the long winded ness of it. It 6hours long and didn't get to the erotica until 4 hours in. This was supposed to be an adult romance not a Syfi storyline.

one is too high