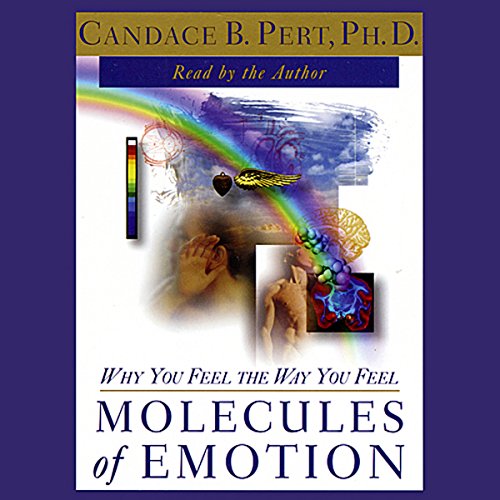 How do our thoughts and emotions affect our health? Are our bodies and minds distinct from one another or do they function together as parts of an interconnected system? Candace Pert - a neuroscientist whose extraordinary career began with her 1972 discovery of the opiate receptor - provides startling and decisive answers to these and other challenging questions that scientists and philosophers have pondered for centuries. From explaining the scientific basis of popular wisdom and phenomena like "gut feelings" to making comprehensible recent discoveries in cancer and AIDS research, Molecules of Emotion is an intellectual adventure of the highest order.
©1997 Candace B. Pert, Ph.D., All Rights Reserved (P)1997 Simon & Schuster Inc., All Rights Reserved
Alternative & Complementary Medicine Neuroscience & Neuropsychology
Show More Show Less

"Finally, here is a Western scientist who has done the work to explain the unity of mind and matter, body and soul." (Deepak Chopra)

What listeners say about Molecules of Emotion

This book describes the Ligand/receptor communication system within the body and some of the authors work on the opiate receptors. Her work on a new approach to understanding cancer and the development of peptide-T as a possible cure is also described.

Much recent work on consciousness has emphasized the electrical properties of neurons in the brain but Pert points to the importance of an integrated view in which the electrical neural pulses are coupled to the ligand-receptor system and the latter is closely linked to mind through the emotions.

The author also describes the difficulties faced by women scientists in a predominantly male world and the problems involved in bringing a new drug to market. Towards the end of the book she touches on her interests in alternative medicine and a more holistic approach to healing.

A fascinating book, readily accessible to the general reader.

Very valuable information, shocked when I discovered it was abridged. no warning on audible
site

not quite what I expected, but good

enjoyable story, but not quite what I expected, this is more about the female struggle in a man's world, the consequences of action and in action. Good story on how discoveries were made, but for me too little on this subject and too much on surviving a man's world!

Her voice draws you in from the beginning. The level of science is just enough to not bamboozle a layperson.

Body & mind meet for sure.

Interesting read for confirmation of emotion and body links... as a trauma therapist this confirms what my clients tell me year after year.

not what i thought. more of a science book

Not what i thought. More of a science book. i found hard to understand the terminology

Powerful, both intellectually stimulated and heartwarming

As an Engineer it was scientific enough to keep me engaged, but high-level enough for someone that has not been through a medical degree.

Well written and spoken throughout. The story and messaged was clear, weaved through the scientific journey that led to her groundbreaking work.

It had led me to think more about the mind-body connection, and in particular the role of movement and meditation.

truly inspiring and informative well worth a listen. A great insight into how we work linking emotions and biology

Truly revealing and reinforcing what we already know intuitively, within the heart of our hearts

I got this as a free audiobook from audible.com. I am a chemical engineer/chemist by trade and thought this sounded like an interesting read. The book is narrated by the author Candace Pert.

The very first thing I noticed is that the author is incredibly conceited, she spends a lot of time bragging about her accomplishments right away. This book is more of an autobiography than an actually book behind the science of emotion.

There are some interesting theories in this book, that I think many people would agree with. The main theory is that emotional state is caused by a variety of chemicals, particularly peptids. These molecules not only have an influence on your emotions but on your overall physical health as well, you can't really separate the two. I think this theory was groundbreaking at the time, but much more widely accepted now.

There is a also a lot of discussion about the male domination of science and how hard the author had to work to get recognized. I think maybe this might have been more true in the 70's than today. The author also comes to the realization by the end that maybe it was her aggressive attitude and combativeness that caused some of her issues with her male cohorts and I couldn't agree more.

Working as a female in a male dominated field I have found that the opinion of those around you (male or otherwise) is fed by your attitude towards them. I have never had a ton of issue with my male coworkers respecting me and treating me as an equal. I had some issues in college, but now that I am working with the people I want to work with and in a field I am comfortable in it just hasn't been an issue. If you have an attitude of competence, but aren't completely arrogant, I don't think you will have much of an issue.

Okay stepping off my soapbox now...

Overall this was an interesting read, but not exactly what I was hoping for or expecting. It is more an autobiography of Pert’s work and a treatise on the struggles of female scientists than an explanation behind the chemicals that guide our emotional and physical health. It was free so I can’t really complain, but I wouldn’t really recommend it either.

I was amazed to find out how much autonomy the body and it's various systems have and how they are affected by our very thoughts...much like our appetites. This could be ground-breaking self-healing or self-improving information for people who carry a lot of stress in their lives. It certainly leaves you with a different perspective about who you and your body are and how you both function together.

I want the UNabridged version!

Love Candace! It was such fun to hear her voice since she was the reader! I miss her. And the world will never be the same.
However there should be an audible version of the entire book. Every wording hatbox was important. Now I must go read the physical book again, because I miss the parts left out of the Audible book.

The book, unfortunately, talks more about the author's odyssey in science than it does about the topic of the book. The author's personality looms large, while peptides only get short shrift. The narration is good and easy to listen to.

After looking forward to this book for years, I was disappointed by the fact that it reads more like an auto-biography. I was very interested in the scientific link between body and emotions, but I don't feel that came through enough. This is an abridged version and something has definitely been lost as a result. I'll have to look through the full book to perhaps get some satisfaction.

Interesting to find out we are most of neural activity is chemical and non-synaptic. A scientific research of how our thoughts affects our health.

Off topic and dull

This book is 90% dead dull blather about the politics of lab people and 10% science that relates somewhat to the title.

An interesting look at the science of emotion

Candace Pert, a neuroscientist and discoveror of the opiate receptor, recounts both the intricate relationship between mind, body, and emotions, and her own career uncovering those connections and the neurochemical basis of them. Beginning her career in the early 1970s, gender was an even bigger obstacle than it is now, which no cultural or legal expectation that it shouldn't be. Sometimes she had to fight for recognition of her contributions; other times she had to fight to be able to do the work at all.

But along the way, she made major discoveries, and had life-changing experiences. The mind-body dichotomy was still unquestioned scientific orthodoxy in her early days. She doesn't say, but I will: Rene Descartes has a lot to answer for. Pert's work with neuropeptides and their receptors helps to rebuild the essential unity of the person, mind, body, and emotions, and uncover the connections between our emotional health and our physical health.

There are times when this goes right up to edge of woo-woo, but it doesn't cross over. Pert is spiritual, religious, and very much a scientist. No, that's not a contradiction or a paradox. She's quite open about her beliefs, and the interrelations among the different aspects. Her central, guiding principle is a commitment to truth.

It's a fascinating story. There are times when I find it quite frustrating. It is, however, well worth reading if you are interested in the topic.

This book is a revelation of scientific discovery and real world/real life application. It's a must read/listen for anyone going through health complications as it goes into great detail about how our body truly functions and can become dysfunctional through life events. I enjoyed that the author, Dr. Pert was the reader as there's no better individual than self to present their life's work! Due to the depth of the science involved, it can be a little dry if biochemistry and neurobiology are not of heat interest to you but I found it incredible that she goes into detail without overwhelming the reader. I really enjoyed this book and am thankful for the significant contributions that Dr. Pert has made to improve our lives through her dedication to research and creating a better human experience.

Seemed more of a journal of the author' s experiences.
Needed more information on how the molecular emotions effect the body. And suggested alternatives.