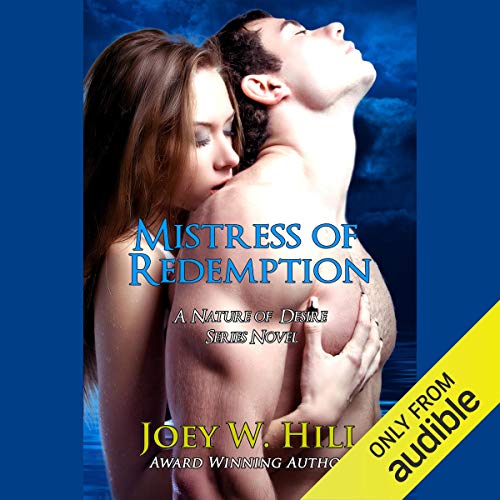 Jonathan Powell was living the fast life - fast cars, fast money, fast women. But an executive transgression goes too far and lands him in prison for five years.

Now, recently released, Jonathan vows to be a better man and live it straight. But that vow changes dramatically when he meets Mistress Dona. She’s everything that makes him weak with desire to dominate women...in the bedroom. A killer on Powell’s trail is an added twist to a plot full of, ahem, arousing meanderings.

Mistress of Redemption is coquettishly performed in suggestive tones by Maxine Mitchell.

The white-collar life Jonathan Powell created for himself is gone. Standing outside Wentworth prison after serving his five-year sentence, he knows he has to start over. No more hooking up with Dominant women so he can enjoy the challenge of screwing up their minds. But who knew his last target would be a psychopathic killer who tried to off two cops? No, it wasn't the game that was the problem. He just made some key mistakes. Mistakes he won't make again. Then Mistress Dona shows up to give him a ride from the prison into his new life, and his resolve goes out the window. She's everything he can't resist. Dona knows she has to help Jonathan make the right choice this time, because Hell doesn't offer options. He has to understand and accept what surrender truly means. His only hope is a Mistress of Redemption. The problem is she may lose her own soul in the attempt to save his.

A lot of blood.

As great as the performance was by Ms Mitchell, it was difficult to listen to the content of the story. For me it was hard to imagine anyone being aroused through most of the things done to Jonathan. Hearing the abuse he endured was also difficult. I listened to series out of order and this was my least favorite. I have already listened to a couple of the stories again. That will not be happening with this book.

I've loved all the other books so far of this series but this one I have struggled from the beginning to get into. the others had a loose association that threaded through the story line, but this one had one mention if the association more like an afterthought and nothing else seems to tie back in. Each scene is disjointed and seems to jump from thought to thought almost like they had all these ideas for books and decided to mash them together. take a stab at it if you want but wasnt for me.

Pretty good (3 stars) but not what I expected. The other books in the series were set in the “real” world and this book spent a lot of time in other realms with supernaturals.

I purchased this book on recommendation of being one of the best femdom romances around, and I'm sure it is given how much I like Joey Hill's other book I purchased. But I couldn't listen to more than a few minutes of this one due to the poor narration.
The reader's voice is fine, but her intonation and pauses are extremely repetitive without matching the pace or importance of the written sentence. There were multiple sentences that I had to rewind and listen again because the flow was so off. unfortunately, I mostly only have time for audiobooks, so I might not get to read this recommended story for a long time unless it is redone with a better reader. :-(

Not my kind of book at all his other books are way better. The whole devil hell saved soles are not my kind of thing

Joey W. Hill is one of my favorite authors. This book was unexpected and not my favorite but I still enjoyed it. Jonathan was just not a character I liked at all from other books in the series. It was interesting that I fpund myself empathizing with him. That's one of Joey's many talents, each book has so many enotions you can't help but get invested. I love this series!