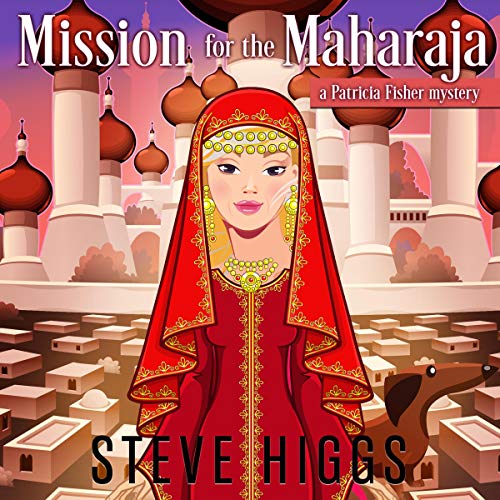 Mission for the Maharajah

By: Steve Higgs
Narrated by: Helena Little
Try for £0.00

When Patricia returned the missing sapphire of Zangrabar, she had no idea the maharaja would consider himself eternally in her debt. Hardly surprising then that she has been invited to his son’s coronation as the new maharaja.

There’s intrigue and mystery afoot, though. The Marahaja’s invite suggested he had a mystery for her to solve, but in true Patricia style, it’s nowhere near that simple. Someone in Zangrabar wants her dead, but they didn’t count on the tenacity of her friends and the loyalty of her butler. Beware wrongdoers, Patricia is getting used to ruining nefarious plans.

Get ready for adventure in the desert as Patricia and her entourage take on a secret mission that will place them in the middle of a perilous conspiracy and may cost them more than they want to pay.

What listeners say about Mission for the Maharajah

Review of audiobook. Mystery, action and humour, Patricia Fisher mysteries have it all. They are a little far-fetched and the plot twists are predictable, but these books are so much fun. Having read books 1–6, this is the first Patricia Fisher book I have listened to. The narration was excellent.
I received this from the author with no obligation to review.

Definitely worth listening to!

This is the first one of Steve Higgs mysteries I have listened too. I usually read them.
I loved the narrator, she definitely bought out the best aspects of Patty and her crew. Whilst listening I am enthralled and have to know if I too have solved the mystery. I want to know if Anna secretly had a doggy affair with the Queen’s corgis? These books remind me of Miss Marple but in a different day and age. They will definitely leave you with a smile on your face.

I usually get a little frustrated when books seem to jump the shark, going so crazily out of the realistic zone, but—even though this plot should have felt that way—it just didn’t. It totally worked for me. I really really liked it!
And the mix of new characters as well as a sort of reunion of a good deal of the old ones made this special.

The narrator was very good, and did the ambassador so perfectly!

Totally moving on to the next. Like right now after I type the last period here.

I had a day which was full of me driving...so I listened to a bit yesterday & found it to be entertaining so needless to say I started it on my morning drive & finished it... today!

interesting mystery with lots of twists and turns, ...colorful characters, smart heroine who might not be a 20 year old but isn't ancient either and is practical and unflappable. the narrator is perfect and does a wonderful job on different voices. ..very enjoyable listen.

Patricia and crew are in danger and never stop!!!! This one is fast pace with twists and turns that literally never stop! Just when I thought I had it figured out it would go in a completely different direction!!!!! The reader was outstanding!!!! Steve Higgs outdid himself with this book!!!!!!!!