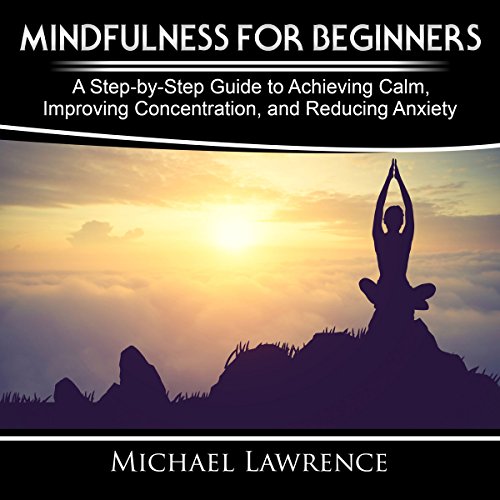 A Step-by-Step Guide to Achieving Calm, Improving Concentration, and Reducing Anxiety
By: Michael Lawrence
Narrated by: Christine Williamson
Length: 31 mins
Categories: Health & Personal Development, How To
2 out of 5 stars 2.0 (1 rating)

Mindfulness is the psychological process of bringing one's attention to experiences occurring in the present moment, which can be developed through the practice of meditation and other training. The term "mindfulness" is a translation of the Pali term sati, which is a significant element of Buddhist traditions. In Buddhist teachings, mindfulness is utilized to develop self-knowledge and wisdom that gradually lead to what is described as enlightenment or the complete freedom from suffering. The recent popularity of mindfulness in the West is generally considered to have been initiated by Jon Kabat-Zinn.

Large population-based research studies have indicated that the practice of mindfulness is strongly correlated with greater well-being and perceived health. Studies have also shown that rumination and worry contribute to mental illnesses such as depression and anxiety, and that mindfulness-based interventions are effective in the reduction of both rumination and worry.

Clinical psychology and psychiatry since the 1970s have developed a number of therapeutic applications based on mindfulness for helping people who are experiencing a variety of psychological conditions. For example, mindfulness practice is being employed to reduce depression symptoms, to reduce stress, anxiety, and in the treatment of drug addiction. The practice of mindfulness also appears to provide numerous therapeutic benefits to people with psychosis, and may also be a preventive strategy to halt the development of mental health problems.

Clinical studies have documented both physical and mental health benefits of mindfulness in different patient categories as well as in healthy adults and children. Programs based on Kabat-Zinn's and similar models have been widely adopted in schools, prisons, hospitals, veterans' centers, and other environments.

The benefits of ✌️are priceless..

This book is great for anyone new to the concept of mindfulness. The focus is on how organizations are now using mindfulness training to keep students and military personnel focused. And how the benefits of meditation can help alleviate stress and improve your wellbeing. The narrator did a good job conveying the author's message. I requested this book in exchange for my honest review. I did find this book interesting, but wish a guided meditation would have been added at the end.

Christine Williamson does a wonderful job of narrating this book. The step by step guide is written so well and easy to follow for a beginner. Simply great. I was gifted this with the understanding I would leave and honest review.

Im always looking for tips to achieve successful ways to calm my anxiety and this helped. I was voluntarily provided this free review copy audiobook by the author, narrator, or publisher.

For a beginner this will explain the benefits of meditation, the different meditations, and a lot more information. Though, it really isn't a step by step guide. However, I really like the balance between actual guided meditation and the reminders of what it's all about. Even for someone who understands and practices meditation, sometimes I can better focus on the ideas of it and it calms my mind to a point where it's not jumping all around when I start actual meditation.

Mindfulness for beginners is a really good intro to the concept of mindfulness. The information is presented in a easy to digest, user-friendly manner and the reader will be left with a solid understanding of the concept. In my opinion this book is a good fit for anyone looking to integrate mindfulness into their classroom, healthcare practice, or organization as an employee resource. It's a great way to learn about the practice of mindfulness to the degree that one would be able to make an informed decision regarding it's applicability for integration into the aforementioned. In that same vein, the narrator sounded like the voice you would hear if you were watching an intro video to prepare you for an upcoming medical or dental procedure or perhaps a video explaining in-flight safety information before your plane takes off...a soothing intelligent sounding voice with little in the way of inflection. Thank you to the author, the narrator, and audiobook boom for the complimentary copy of this book in exchange for this fair and unbiased review.

I noticed an improvement in my anxiety after listening to this audiobook. Short listen that was very helpful and great narration!

I was given this free review copy audiobook at my request and have voluntarily left this review. The fact that I was gifted this book had no influence over my opinion of it,

I think I was expecting more guided meditation samples and less information. Having said that, I think the information was valuable and the presentation was efficient but not rushed. I'm sold on the benefits of the practice and feel like my decision is an informed one now, but wish a deeper sample had been provided. I received my copy of this audiobook in exchange for my honest review.

I woke the next morning felling well rested (which is a great improvement) and was able to have a good day. I also noticed that my appetite was under control. I am planning on making this part of my new healthy plan. I received this for free for an honest review.

Mindfulness for Beginners AND Practitioners

I loved listening to this audiobook. I can never get enough of mindfulness insight and information. I found this audiobook so helpful. It offered straightforward advice and info as to what the practice of mindfulness is and does as well as the many people and places who would benefit from learning this practice. Knowing what minfulness is and applying it is the goal.

This audiobook helped me out as it gives me another mindfulness tool in my toolbelt. I as do probably many people feel stressed in my daily routine and I need frequent reminding to be more mindful. I liked the parts about how people with health issues as well as students and even employees can benefit greatly from practicing mindfulIness. I could go on and on. I'd recommend this book for sure.