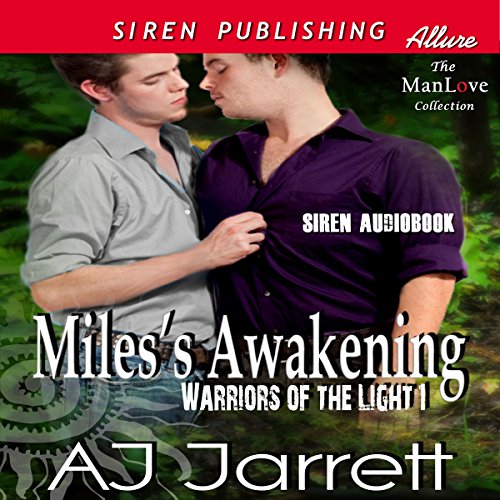 A member of the Council of Paranormal Beings and leader of the Warriors of the Light, Ben has for centuries kept order in his world. Having been sent to destroy an evil vampire by the name of Malcolm, his mission gets diverted when he discovers the man Malcolm has been stalking is his destined mate. Miles lived a quiet life, but all that changes when he gets caught up in a tug-of-war between good and evil. Being the fated mate to Ben and Malcolm has put his life in danger. Ben is the only one who can save him if he can just surrender his heart and accept his destiny. In an attempt to protect Miles, Ben gives Malcolm the opportunity to take what he holds dear. Time's running out. Can Ben save Miles from a fate worse than death? Or is Ben forever destined to be alone? Note: This book contains forced seduction.

What listeners say about Miles's Awakening

A twist on the whole mate story.

I have to say this book kept me interested. The book is filled with moments where you are like "Are you serious!" or "OMG". There are witches, vampires and werewolves. Miles is a sweet guy who wants just wants to go to school until his whole world gets thrown upside down by his not one but two mates. What ordinary human can say they have two mates?! Ben is determined to show Miles just how much he cares for his mate but at the same time he is constantly faced with obstacles.
Michael is a vampire that is down right evil and is determined to make Miles his. Michael and Ben know that whoever can make their mate theirs will become stronger with or without their mate's permission.
I can't wait for more of the "Warriors of the Light" series! A great read and very hott!!!!!