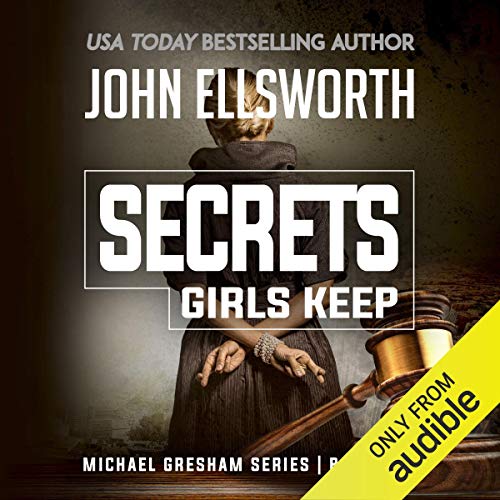 By: John Ellsworth
Narrated by: Stephen Hoye
Try for £0.00

Got a killer in your guest room? Michael Gresham is a criminal attorney whose priest has fathered a son. The boy is now 17, acting out, and arrested for first-degree murder. The priest asks Michael to take his son into his home so he can be released on bail. Michael and his wife agree and the boy, with his snake and mice, moves in. One young client who looks guiltier with each new death.

The new houseguest gets questioned by the police for yet a second murder. Michael Gresham and his wife become uneasy and, when the young man begins acting out, they finally move him out. The snake and mice move out with him. One courtroom thriller that curls around and surprises even the keenest listeners.

A legal thriller sure to satisfy the most demanding listeners of legal fiction and lawyer novels. For the fans of John Grisham and Michael Connelly, the novels of John Ellsworth are burning up the Amazon charts with over 500,000 downloads in the first 25 months of publication. Be the first in your group to discover this amazing writer and his long list of books and exciting characters.

Tugs at the heart strings

This novel, Book 2 in the Michael Gresham series, is better than the first book. It is a profoundly disturbing, dark legal thriller. I look forward to Book 3. Gresham is a criminal defense attorney in Chicago who is practicing with his wife. There is lots of action and suspense both inside and outside the courtroom. I'm not a fan of the voice of narrator Stephen Hoye, but he does a more than credible job with this novel. Highly recommended. Oh, and when purchased at Amazon in conjunction with the Kindle version, the Audible book is very inexpensive.

Unfair all the way

Of course she was a suspect But hes forever being explanatory seemed at least realistic. Then attorney GreshamAnd his big heart caught him in trouble.

Great until the last 5 minutes!

I was going to review this book 5 stars arcoss thee board, however the last 5 minutes ruined it for me. I'm not going to say any more, but read it and see if you agree with me.

Great from start to finish. Story was explosive and moved quickly with a few surprises . Character development was strong and consistent. The reader was outstanding. it seemed to be his story and his tone was always appropriate. I will definitely buy more stories from this author.