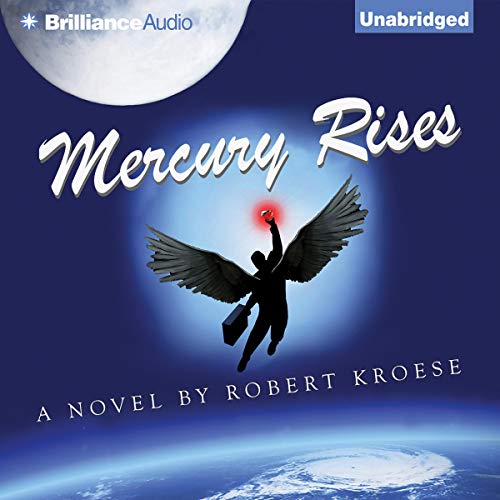 Fresh off their successful quest to thwart not one, but two diabolical plots to destroy the world, jaded reporter Christine Temetri and rough cherub Mercury find that mysterious powers outranking even the Heavenly bureaucracy seem intent on keeping the Apocalypse on track. Mercury Rises continues author Robert Kroese’s tale of the heroic cherub Mercury, who is generally well-intentioned, rarely well-behaved, and always well-armed with a droll remark. While the world is plagued by natural disasters and nations prepare for war, crazed billionaire Horace Finch plots to use a secret device hidden beneath the African desert to discover the deepest secrets of the Universe - even if he has to destroy the Universe to do it.

Meanwhile, unassuming FBI investigator Jacob Slater tries to find a rational explanation for the mysterious destruction of downtown Anaheim - a quest that ultimately brings him face to face with the unhinged Horace Finch. Together, Christine, Jacob, and Mercury must stop Finch from activating the device and tearing reality to pieces. Kroese’s rapid-fire sense of humor and razor-sharp wit keep Mercury Rises moving at breakneck speed, hurtling toward a climax that is as funny as it is satisfying.

What listeners say about Mercury Rises

A humorous distraction, I enjoyed it very much!

it's just rather entertaining I'm not sure if I can find 20 words that completely could describe it.
other than enjoyable, fun, funny, & I had to replay parts to completely absorb some of the elements. I was looking for a humorous distraction and I found it.

the story falls a little short of the first and it leaves a little early in favor of the third, but it is enjoyable and Still well makes it a pleasant past time.

Book 2 exceeded my expectations! It was better than the first one. It made more sense it was funnier than Mercury falls. The author's voices weren't as bad either. Much better Jon this time. I enjoyed this book. I hope the third gets even better!

I really love the characters and humor in this series. Strongly recommended for people who enjoy comedy sci-fi.

Terrific performance of a so-so story

Story was fun but relied on too many McGuffins to resolve writing itself into corners.

Good book with a caveat...Iowa, despite its depiction, was the first state in the Union to allow gay marriage

Just saying. I’ve enjoyed the Mercury series so far. It’s a fun, madcap romp through theology, demons & angels and the Apocalypse- what’s not to love? Despite all of that, and the great narration by Kevin Stilwell, I take issue with the continuing take on Iowa being a bastion of conservatism when relating to Troy. We were after all, the first state to legalize gay marriage. Even if we have fallen prey to the conservative bent the whole country has devolved into. Actually, now that I think about it, we appear to have become as sheep-like as the rest of the country. So. Never mind. How ‘bout them Bears?

Doesn't Rise to the Level of Mercury Falls

End times reporter Christine is back and (eventually) teams up again with rogue angel Mercury to save the world a second time from Lucifer and other wayward and sundry heavenly beings. If you haven't read Mercury Falls, the first entry in this series, you could theoretically read this book all the same, but in addition to getting the full back story, I'd recommend Falls just because it's a better book with a better story and better jokes.

Rises is not nearly as focused story-wise -- I don't think it really gels until near the end -- and it takes at least half the book for Christine to reunite with Mercury, much to the detriment of the reader, given their chemistry as a duo. Robert Kroese also forgoes most of his spiritual musings and mythological meanderings, which made Falls that much more interesting. I will give the series another go just in case this is a one-off dip.

I wonder if Kroese has considered suing Fox for ripping him off in the show Lucifer. Sure, Kroese cannot lay claim to making heaven a bureaucracy and using angels and demons as characters, but in this book, Cain (Adam and Eve's fratricidal eldest) is cursed forevermore with immortality and longs for nothing more than death -- exactly what they did with Cain in Lucifer last season.

More humor from the heavens.

The Mercury series is a humorous take on religious themes and viewpoints sprung from a story about a whimsical angel and the kooky other characters he interacts with while trying to delay the end of days. It uses biblical events as a reference to build it's wacky universe filled with funny reimaginings and goofy plot twists that is sure to make a listener smile. This audiobook is a self aware comedy that can't even take itself seriously if it tried.

"Mercury Rising" takes place after a breif recovery period from the first book. There are new characters, new comedic reimaginings of biblical events, and a pleasantly confusing jumble of humor and philosophical reflection that made the successful leap from the first book.
In all fairness, sometimes the plot can seem a bit tangled as the past and present leaps in logic are a bit jumbled sometimes due how many there are, but if a listener knows what took place in the first book and doesn't mind random flashbacks then it shouldn't be much of an issue. The jokes are still there regardless and they are great.

The narrator was simply hilarious. Kevin Stillwell really got into his voicework here, especially his interpritation of Noah singing his crazy "Who built the ark?" song. Great stuff.

This book is recommended to anybody would needs a good clean laugh and appreciates and unconventional setting to laugh at.

Yes, probably good to read. Not so much to listen to on Audible.

What other book might you compare Mercury Rises to and why?

Did Mercury Rises inspire you to do anything?

Yes. It inspired me to write this review. This book deserves a better audio edition.