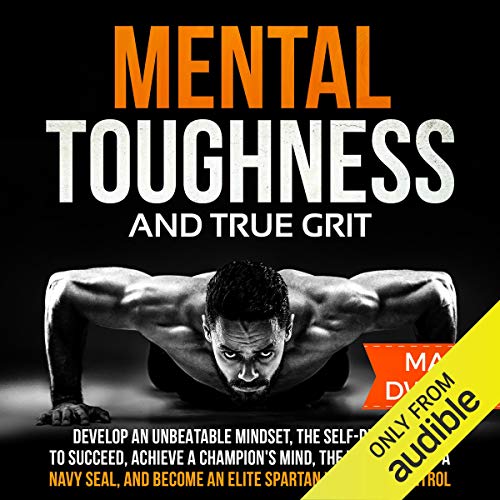 Navy SEALs, Olympic athletes, champions - how did they get where they are? What’s the common thread that ties them all together? More importantly, what do they have that you don’t?

If you look into their past, you’ll find every single one of them was just like you. Problems, weaknesses, poverty, prejudice. Normal human beings with normal human flaws. But if they weren’t born great, and they didn’t inherit it. How did they do it? What powered them through all the hardship?

You put in effort. You try. Sometimes, you fail. Eventually, you get better, and your mind starts to harden. Overcoming challenges becomes a way of life.

For instance, every Navy SEAL had to endure the kind of pain that would make most men give up before starting. Every Olympic athlete lost before they won, fought to the bitter end, trained till their body gave in. Every champion failed their way to success. They had no way to know if they ever would succeed, and the only difference between them and you is they discovered how to mentally grind away at what needs to be done, endure the pain and failure, and yet rise up every single time. They gained a mind-set that allowed them to go where few had gone before. They built certain habits that helped them see it through. That’s the difference between them and you. Just like them, you can create powerful change.

In this audiobook, I will show you:

If you’re tired of quitting too soon and you’re ready to pull your life together, scroll up and order your copy of Mental Toughness and True Grit now!

What listeners say about Mental Toughness and True Grit

Everyone should listen this book.💙

Struggled to finish this book. It seems like a collection of 'tips' without strong points to back them up. The writting style is not at all motivating - quite the contrary to be honest, as it feels like the author is commanding you to follow his advice instead of suggesting certain changes in your lifestyle. The narration doesn't help either. The narrator fails to communicate with the reader, the narration is monotonous, and there is absolutely no emotion/reaction in the narrators voice, all of which make it extremely hard to follow.

The author very efficiently and effectively lays out the habits that will build up mental strength and toughness! So glad I listen to this book.

I am very happy with this book!

I learned strategies that can be applied in any situation irrespective of your age. Get to understand the importance of using mental exercises to build this aspect of my life. I am very happy with this book!

struggled to finish this, typical American droning, you can be the best!, reminds me of some 90s seminar speech. terrible narrative, save your money or credit, dont waste it on this.

After listening to this book and found excellent information I favored this book. I learned things about myself and how to feel much improved and more grounded in some problematic situations. This is a bewildering book with some better methodologies for thinking. The essayist gives a phenomenal framework for structure up your mind. It's an update that you can accept accountability for your cerebrum and life yet just in case you are enthusiastic enough.

Listen to the book by accident, in the beginning, I was not into it. By the first quarter, I was listening to the book daily when taking breaks at work. Great book nice info and helped me open my eyes and program my mind.

This book is so educational!

I cherished the section on blaze listening. I would prescribe it to those searching for mental personal development. Extremely smart with genuine precedents. I highly recommended this book!

This is a really good audiobook. I love it very much. I am waiting for your next book. Thank you very much.

This book is so informative!

This book is so informative! I loved the chapter on flash listening. This will really help me with my work. I'm passing this one on to my son in college also. I highly recommend this book! It's well written, full of information that you can keep going back to and it's an easy listen! Well done!

This book is hot garbage. It reads like a collection of bland blog posts copied off the internet. The author establishes no credibility with his audience, nor is the content backed up by facts or research. The publisher should be ashamed.

Don’t waste your money or more importantly your time.

The author is direct and to the point on explaining how to create solid habits to form a positive attitude and tough mindset. --- I have read other books on this topic and none of them ever covered the value of black coffee, mindless eating and how certain addictions weigh on mental toughness. It's food for thought.

Excellent book. Very helpful in overcoming the set-backs and going through the set-ups that you are bound to encounter in your aspirations for a decent life! This book has guided me to evolve into a stronger minded person. I will continue to read this book over and over again till i can completely take full control of my actions! Will also lend this book to a couple of friends :). Good for your mind, good for your soul.

This book can change your life.

The friend that knows you can be better and makes you want to do better. The friend that asks you all the questions that need to be asked to overcome whatever it is you are working toward. This is a book worth listening for anyone who wants to lead themselves to create the life they desire.

This book unquestionably impacted me and I discovered this book exceptionally keen and brimming with awesome techniques. Sure thing, after listening to the first part of this book I feel excited about the opportunity to develop my confidence and mental power.

This is a great listen! Good info packed into short and sweet simple to grasp. I am a fan of intermittent fasting and recently started using this method the last couple one months to drop weight. It was easy to listen, so that’s good

Hahaha. Unless you are willing to enter into a "legal agreement" just by reading/listening, don't pick up this book. Before you even get started, a legal disclaimer is read stating that that states that you as the reader agree to hold the author and publisher harmless???? Also stated is that the information is for entertainment purposes only...really? What are they going to suggest you do, go pick a fight with a gorilla? Ridiculous!!!

Needless to say, I could not get through the first chapter. The material is something you might expect to find on a high school book report where the student is trying to cram as much fluff into each page to meet the assignment requirements. Don't waster your time and save your money.

The information in this book is good. It is a compilation of information from other sources brought together. The delivery is fast and sounds like a report of information, which it is, not very motivational.

this book gives you different strategies and tips how to make your self-discipline strong. i like how this book details all the different procrastinate types.

This simple and easy to follow guide book is written about mental toughness that will assist you to achieve goal and conquer life with an elite mindset. This deliberate guide book has shared the techniques to exercise and build your mental strength and of course this is possible due to accurate information, appreciated.