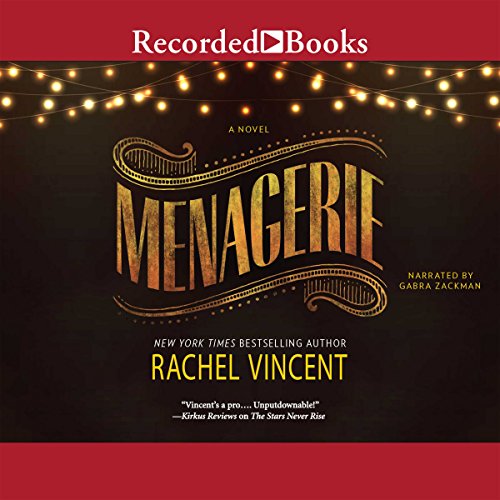 By: Rachel Vincent
Narrated by: Gabra Zackman
Try for £0.00

When Delilah Marlow visits a famous traveling carnival, Metzger's Menagerie, she is an ordinary woman in a not-quite-ordinary world. But under the macabre circus black-top, she discovers a fierce, sharp-clawed creature lurking just beneath her human veneer. Captured and put on exhibition, Delilah is stripped of her worldly possessions, including her own name, as she's forced to "perform" in town after town. But there is breathtaking beauty behind the seamy and grotesque reality of the carnival.

Gallagher, her handler, is as kind as he is cryptic and strong. The other "attractions" - mermaids, minotaurs, gryphons, and kelpies - are strange, yes, but they share a bond forged by the brutal realities of captivity. And as Delilah struggles for her freedom, and for her fellow menagerie, she'll discover a strength and a purpose she never knew existed.

What listeners say about Menagerie

The writing was good and made me care about the characters

How would the world be if mystical creatures existed? Would we discriminate against them and treat them as less than human? What is it that makes us human? Is it our appearance or is it how we treat people? These are the main themes explored in this new paranormal book.

Pleasant voices are essential to bring a book to life. Garbra's narration was enjoyable.

Not really but I like to space books out.

I'm probably not the right audience for this dark story. It reads like its intended for YA. I appreciated the concept and the discriptions of the captives ( mythical creatures one and all ) in the menagerie, but I actively disliked the depressing descriptions of physical and emotional cruelty. The narrator's voice was so deep that it was difficult to understand at times. Maybe that's a blessing, because the prose is truely terrible. Really awful writing, but an interesting concept. I recommend "The Night Circus" (fabulous) or "Water for Elephants" if a circus setting is appealing.

Parts were, much was not. I thought that the world building and supporting characters in this book were far, far more interesting then the main protagonist and antagonists.

The main character is incredibly insufferable and hard to like. She comes off as a flawless, perfectly altruistic person whom never has to suffer and wins every situation she is put in.

The character had been living in a society of slavery for her entire life and only seemed to have a mild distaste for the treatment of cryptids during that time. Once the tables are turned though, she suddenly becomes the perfect liberator whom shines as the only beacon of hope for the cryptids. This is the white savior trope to a T.

The antagonists are one dimensional sociopathic men.

The supporting cast are far more interesting than the main characters. The other cryptids seem to have flaws and have truly suffered during their time in captivity. The world the characters live in is dark and interesting and seems well realized.

Would you ever listen to anything by Rachel Vincent again?

Maybe. I liked the world building and supporting characters in this book but found the main characters insufferable.

The voices were easy to distinguish and well performed. Very good performance.

Its a sappy and predictable story under the guise of being dark and creative. I guess I was expecting more of something similar to "Something wicked this way comes." Its not. Nothing is complicated about this story.

Cool basic concept, especially this universe's mysterious cataclysmic event, but an annoying and unrestrained writing style undermines the piece at every turn. Story grates quickly by considering every tiny little beat to be a huge deal, taking time every few pages to explain how this or that little thing has once again rocked the main character's world- a self-conscious writing trait that waters down the work's overall emotional potential. Nearly every male character in this book is a leering, cartoonishly deprived sicko, expect for the one honorable guy who, and I'm not joking here, uses the catchphrase "my word is my honor." Main character also suffers from "Can't Put 2 and 2 Together Disease," being unable to connect even the simplest dots, leading to several cringy moments for me throughout. The climax, while riddled with holes, is where the book finally finds its footing, and I think where it leaves off would have actually made for a more interesting story. Narrator is alright, but she doesn't have much range- something that becomes painfully apparent when the lifeless, monotone voices for all her male characters start coming out. [AUDIBLE]

This was almost good enough, but I found the heroine a bit on the dim side. What was obvious to the listener seemed to escape her. Knowing what was going to happen and listening to Lilah not have a clue was painful.
I might have continued with the series if not for the fact that instead of the story continuing with how the crpytids were succeeding in their masquerade, they end up in an even worse situation.

Interesting concept but felt like it was written by a romance novelist. Ending felt hurried.

The End? Too many loose ends. Disappointing. Story was good up to the last few chapters when I think the author was in a rush to finish. I feel cheated.

Had so much potential

This book had so much potential. I kept waiting and waiting for the story to build up, but there never really was a climax. There also wasn't really an ending. The author did a great job building up the characters (even though I hated how dense the main character was), then the book just ended. All that potential was just left sitting out in the open doing nothing. Wish there was a follow up book that put some closure to this.
The ending was also hodgepodge. Nothing is really happening, then all the sudden a bunch of people show up for no reason, stuff happens just to happen, then it's over. I think that was supposed to be the story's climax but there was no rhyme or reason behind it. It just didn't match up with the story.

After the second chapter I gave up. My fault I didn't read the genre or synopsis. Definitely not my cup of tea

Would you try another book from Rachel Vincent and/or Gabra Zackman?

Probably not. I'm not certain why I originally chose to purchase this title. However, it was certainly not the type I am usually attracted to. Perhaps someone else's review made me think I would like it. It is a very strange story. At first, I kept thinking it was going to get better, but, it never did. I finally quit listening.

Has Menagerie turned you off from other books in this genre?

Yes, it has. It was too unbelievable.

Performance was done well. It was the story that had me shaking my head and wondering why I was wasting my time with this one.

Just disappointment. Sorry, not what I was expecting.

This is a return book.